Gmail 2.0 is a promising but ultimately flawed option for iOS users

Almost, but not quite the Gmail app we've been waiting for

Share All sharing options for: Gmail 2.0 is a promising but ultimately flawed option for iOS users

When Google first launched its first dedicated Gmail app for iOS last year, it was a buggy embarrassment that lacked many of the key features found in Android's Gmail client — or any other real mail client. While Google eventually ironed out many of the bugs, it was still essentially a glorified web client — it may have worked for light Gmail usage, but it was hard to recommend over more fully-featured apps like Sparrow or even Apple's default Mail app.

However, Google's been giving its iOS apps more love lately. The recently-redesigned Google+ app stands as the best-designed app the company has released for iOS, and the new Google Search app is similarly full-featured. On the surface, Gmail for iOS 2.0 appears to follow suit — read on to find out if it truly improves on Google's previous offering, and if it's a strong enough app to fully replace Apple's Mail, Sparrow, and the other options users have tried to get the full Gmail experience on iOS. 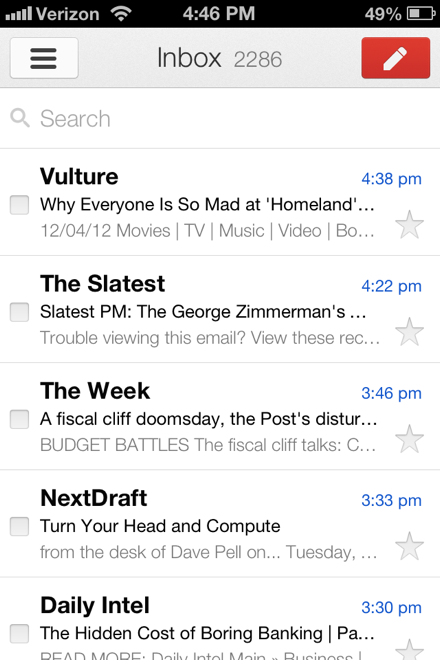 One thing is undeniable — Gmail 2.0 is a huge upgrade over its predecessor in terms of pure features. One of the biggest is multiple account support, which means that users can finally have several different Gmail accounts under the same app. This missing feature meant the Gmail app was previously a non-starter for many, but now iOS users can easily get multiple Gmail accounts pushed to their phones or tablets. Sadly, there's no universal inbox, something we've grown accustomed to in Sparrow and definitely miss here. This feature isn't even present in Gmail for Android, so it's hard to knock its omission too hard — it just seems that Google doesn't really feel this feature is crucial to its users. As heavy Gmail users, we'd have to disagree. 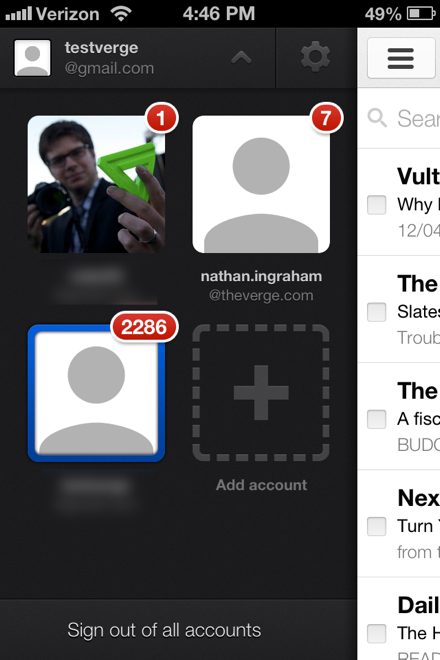 The app also received a pretty major visual overhaul, with the overly dark visual theme being replaced by something much brighter with larger and crisper fonts that bring to mind the aforementioned Google+ app for iOS. While the styles aren't identical, the new Gmail app has a lot more in common visually with Google's other recent iOS apps. There are also some nice, rather tasteful animations throughout the app that aren't overly flashy but still serve to add a little visual flair to an app that's a large series of white panes.

It's a big visual improvement, but still feels like a web app

Threaded messages also get a new, helpful view in this app — the top portion of the conversation is dominated by the subject and relevant labels, while included messages are laid out in rows below, with avatar images and bolded names to help orient you to the conversation. It's a nice view, but it doesn't show off a ton of information in the space available — only about a sentence of each message is visible. Long threads are collapsed by default and can be tapped to expand — but you can't easily re-collapse the thread at that point. 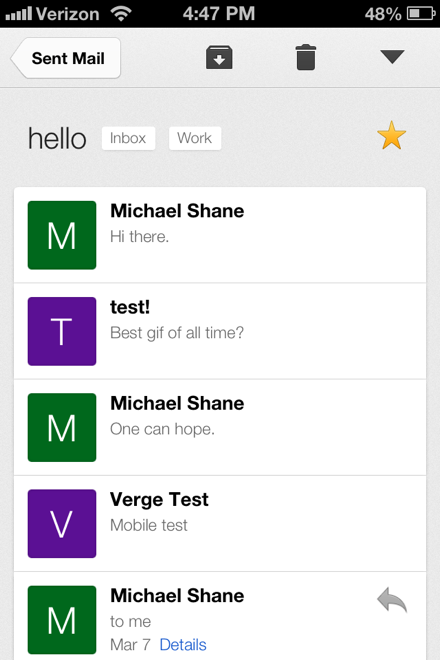 Speaking of Google's other apps, Gmail also plays better with Google Calendar and Google+ — you can directly reply to calendar invites and Google+ email notifications in your inbox. While these aren't exactly revolutionary features, they do help make the Gmail on iOS experience feel that much closer to the real thing. Other new features, like search completion and the auto-refresh of cached emails when you reach the end of a list all contribute to this feeling more like Gmail than any other version of the iOS app we've tried thus far.

While there's no doubt this app is an improvement over past iterations, things start to fall apart a bit once you compare Gmail for iOS to other mail clients — or Gmail for Android. While the app is much more visually pleasing than older versions, we still can't shake the feeling that this is a glorified web app, both in style and functionality. Things lag and stutter a bit more than you'd expect in a native app, and text entry just doesn't feel as smooth as it should.

Another big miss is that there's no way to move between messages — you'll have to back out to your inbox and back in to another email. It's a major step back from other email clients, and it feels like the kind of issue we saw with smartphone email apps years ago, not something being release just before the dawn of 2013. After getting used to the myriad of helpful gestures found in Sparrow, Gmail overall feels quite limiting — take the number of steps required to switch accounts in Gmail compared to Sparrow, for example.

There's a number of other strange missteps found throughout the app that make it feel less polished than it should. For example, if you scroll down your list of emails and load up some that have been cached, then open a message, and then return to your inbox, that cached list has been removed. The swipe to archive feature that showed up in Gmail for Android recently is present, but it lags and feels like an odd, grafted on hack. Priority inbox is a second-class citizen — there's no way to set it as your default inbox or set your notifications to work exclusively with it, like there is on Android. While none of these issues are complete deal-breakers on their own, added up they make for a less than stellar experience.

At the end of the day Gmail 2.0 for iOS is a frustratingly mixed bag. Compared to previous versions of Gmail, there are some major improvements on board — possibly enough to make the Gmail app the full-time option for a lot of users. For power users, however, or people who've grown accustomed to a lot of the features Sparrow brought to the table, it's still a disappointing, second-class app. For those hoping that Gmail 2.0 would bring iOS up to feature parity with Android, that is most certainly not the case. Google will continue to improve its Gmail offering for iOS over the coming months, but for now it's not quite ready for Gmail power users.