Microsoft pulls back the covers on Socl, opens its social network to the public

Microsoft pulls back the covers on Socl, opens its social network to the public

Microsoft is opening the doors on Socl, the mysterious social network project from its FUSE research group. As ZDNet reports, up until now the beta had been limited to a small set of users, but now anyone with a Facebook or Microsoft account is free to sign up.

The first thing we noticed on logging in was that the site has seen a major redesign since last November. Where it used to share a lot of design elements with Facebook, the new layout puts images front and center, with a continuously-scrolling two-column design that has a lot more in common with Pinterest. According to Lili Cheng, Fuse Labs’ General Manager, the team’s idea is to "democratize design and make beautiful posts." Once you're logged into Socl, clicking the new post button gives you a "topic" text field that runs a Bing search for your chosen string. Next, you’re presented with a list of related images, links, and videos that you can paste into a Live Tile-esque grid layout. Also, when you're commenting on others’ posts, a link labeled "Riff on this post" will let you create a new post based on the same search, with a list of relevant links to incorporate courtesy of Bing. 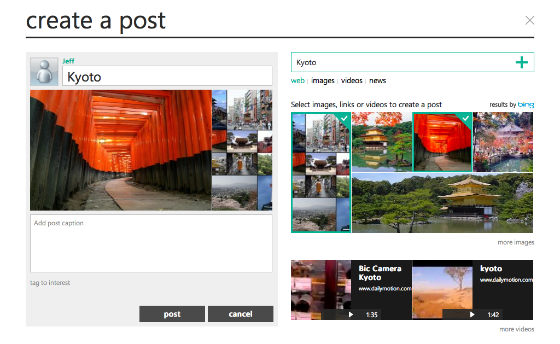 So far, all of the issues we had with Socl at this time last year still stand — there are still no private interactions or curated groups along the lines of Google+’s circles. And despite Microsoft’s stated aim of combining search with a social network, Socl’s simple tagging system still isn’t the most useful way to find relevant content. The project is still a work in progress, but if you’d like to check out what the Fuse Labs teams have been up to, Socl is yours to test drive.