Cobook for iPhone: finally a good way to manage your contacts on the go

Share All sharing options for: Cobook for iPhone: finally a good way to manage your contacts on the go

Cobook for iPhone isn’t bashful about the fact that it looks a whole lot like Apple’s stock Contacts app. On the surface it's just a list of contacts, unlike "smart address books" we’ve seen launch recently like Brewster and Smartr, which rethink the entire notion of an address book. While both offer unique features like highlighting who you’re losing touch with (Brewster), and seeing the volume of emails you’ve exchanged with a person (Smartr), something is lost along the way. The idea of a Rolodex is easy to understand visually, but is missing important information about people from our social networks. That, however, doesn't mean that the Rolodex needs to be redesigned entirely.

"I’ve tried ten or twenty different services, and none of them made me really happy."

"I’ve tried ten or twenty different services, and none of them made me really happy, so I set out to fix that problem," Cobook founder Kaspars Dancis says. Cobook for Mac, which has been downloaded 300,000 times to-date, introduced us to a new kind of "smart" address book — one that brings in Facebook, LinkedIn, and Twitter to enrich the contacts you already have. Many contacts apps destructively alter your contact cards in order to "keep them up do date using social networks," but Cobook lets you view a person’s various online profiles separately and only grab what you need. Cobook for iPhone launches today for free in the App Store.

Cobook is essentially a red-orange version of the iOS Contacts app, but on steroids. Like Fantastical for iPhone, Cobook requires no set-up, and uses the contacts accounts you’ve already set up in iOS Settings like iCloud, Google, and Exchange. Pick a person, and their contact card pops up, just like you’d expect. Underneath it, you’ll find buttons for Facebook, Twitter, and LinkedIn, which provide even more details, phone numbers, email addresses, job titles, and more about the person you’re looking at. It sounds messy, but Cobook succeeds where others have failed in keeping this information out of the way. "We wanted to leave it simple and minimalist, but include social profile integration," Dancis says. Want to see what somebody has been up to? Check out their recent tweets. Curious about somebody’s music interests or websites? Tap the Facebook button. Wondering where somebody’s working these days? A short trip to the LinkedIn card has the answer. 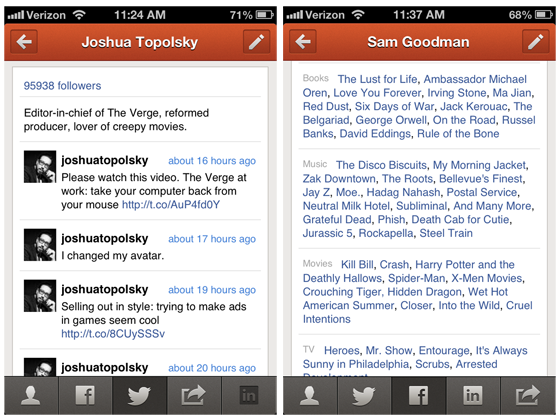 All the data displays inline, meaning you don’t have to exit to Safari. Tapping the Edit button in the top right corner lets you easily copy a phone number, birthday, or email address from someone’s Facebook to their contact card. You can even swipe through a person’s profile pictures and choose one for their contact card. For added context, Cobook brings in "Lists" you’ve created on Facebook and Twitter like "New York City" or "Close Friends," and also lets you create your own lists using hashtags. Swipe the app to the right to access lists of your Twitter friends, Facebook friends, LinkedIn Connections, iPhone Contacts, and "All Contacts," which includes pretty much everyone you know. 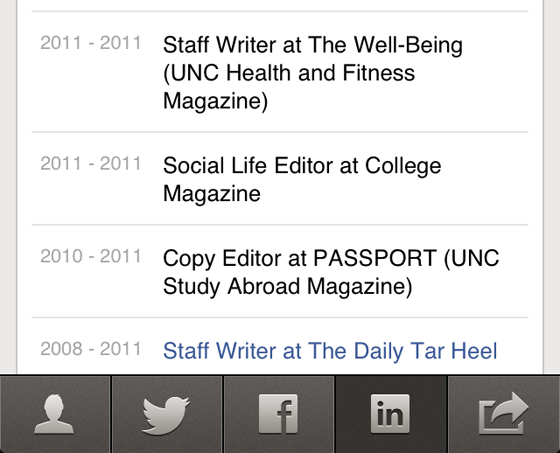 If you sync with iCloud, those hashtagged lists also show up in Cobook for Mac. "I want to remember if I went to some event and met some people," Dancis says. "Now when I open up a person's contact card, I can see when I met them based on tags. It has become a habit, and it’s one place where we really provide an improvement." Groups have never been much of a focus on iOS or Mac, and it's nice to see somebody give them a shot. Cobook for Mac lets you email all the members of a group you've made, which can be handy, but Cobook for iPhone doesn't offer that feature just yet.

Aside from browsing contact cards, Cobook offers a nostalgic way to call people: T9. If you tap the dialer button on the app’s bottom navigation bar, you’re presented with an old school numeric keypad with letters on each key. Until I tried it, I had nearly forgotten how quickly dialing numbers using big T9 keys used to be. Calling "Dad" doesn’t require pecking around on a QWERTY keyboard. 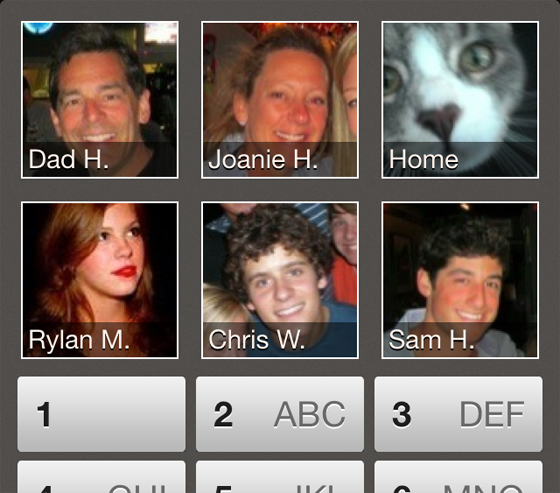 Instead I can tap 3-2-3 (the letters that correspond to D-A-D) and he comes up. If you have several key combination matches in your phonebook, a carousel of images pops up that you can swipe and tap on. I’m not planning to use Cobook to replace my Contacts and Phone apps, however, since I still use voicemail regularly — but the dialer is a nice feature to have nevertheless. "Perhaps it’s too much functionality," Dancis says," but the reason we added it was because for me, contact management and dialing always went together."

Lastly, like Apple's Phone app, Cobook offers a way to "Star" contacts you want easy access to — and these contacts show up first and foremost in the dialer. If you tap the Star on a person's contact card, they'll always appear above your contact list in a special starred section.

I don’t send my contact "vcard" to new acquaintances, since it includes tons of random stuff like my Google Voice number, website, IM screen-names, etc. Cobook lets you create two separate "Work" and "Personal" contact cards that contain only what you select, while leaving your actual contact card intact. If you tap "Personal," then tap the arrow next to an email address or phone number, they get excluded. Once you’re finished removing private information from your Personal card, tap "Email Card" to generate a brand new vcard attached to an email. It’s a wholly new take on split personalities in the digital world, and it’s useful too.

Cobook doesn't fix what wasn't broke - it takes an already decent app like Apple's Contacts and makes it even better. After all, Contacts works pretty well, combining high information density onscreen with a simple user interface. Apps like Smartr and Brewster provide fascinating new takes on the idea of an address book, whereas Cobook is an upgrade for people who love their current address book. "None of those apps are really a contact manager," Dancis says — and he’s right. An app like Brewster is brilliant at analyzing data about how you communicate and with whom, but it's not great at providing a simple interface for looking up emails and phone numbers. Having access to all your contacts, as well as information about them from other social networks inside a clutter-free interface is invaluable. Cobook is a refined if not revolutionary step forward for contacts apps — a reminder that sometimes an upgrade is more valuable than an overhaul.