As it looks to distinguish itself against rival social networks, Google+ goes after the interest graph

Today Google+ is announcing its first major new product, Communities, which lets users create groups, organize, and communicate around their interests. It's a clear effort to define Google+ against competitors like Facebook and Twitter. It's not about organizing around friends and family or following your interests in real time. It's an online hub where people, both friends and strangers, can congregate around topics of interest, post their own thoughts, and chat in real time with Google+ Hangouts.

As part of the announcement, Google+ also provides some new stats, writing that, "more than 500 million people have upgraded to Google+, 235 million are active across Google (+1'ing apps in Google Play, hanging out in Gmail, writing reviews in Maps, etc), and 135 million are active in just the stream."

One of the small details that found its way to the cutting room floor while I was editing my bio-hackers feature story was the fact that people from all over the world who self-identified as part of the "grinder" culture used Google+ to share information and talk with one another. They were a disparate, global group and the Hangouts feature in Google+ worked well for group video chat and live demonstrations. So it made a lot of sense to me that the first big product Google+ is launching leverages this organic success. 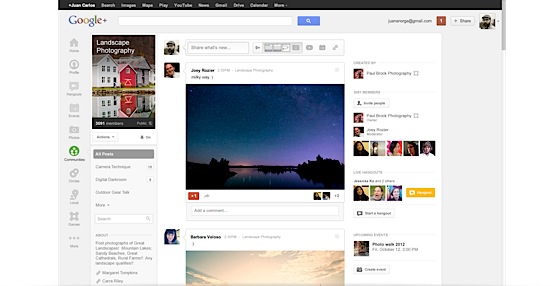 "All these niche boutique communities, biohacking, they have in some ways self-organized and found each other, in spite of our efforts," said Brad Horowitz, VP of Product at Google+. "We have not made it easy for people to connect, we have not provided lots of facilities in the product that made this straightforward. That's changing this week. With Communities, Google+ is making it easy to find your tribe."

Horowitz hit on this word, tribe, several times during our chat. "If you're into kite surfing you can use Communities to find people near you or just to lurk and learn. I think there is no product that meets this use case in market. Facebook most generally is about the people you already know, about your real world connections. On Twitter, well it's really hard to have a meaningful conversation in 140-character snippets." In some ways the product resembles New York-based Meetup, but without the emphasis on organizing to meet offline.

There are four modes for creating a Google+ Community, two public and two private. All content from public groups is indexed and discoverable through search on Google+. You can create a public group that anyone can join and post to or one where only moderators can post but anyone can comment and view. You can also create a private group that is members only but which can be discovered by search. Or you can create a private group that is not indexed and can only be found with the direct url. For now you need to search directly on Google+ to find groups, which can be organized by tags, but its easy to see how this data could make its way into social results on Google's core search product.

"It's really hard to have a meaningful conversation in 140-character snippets."

In a lot of ways a Community resembles a Google+ Brand page, except it can be open for posting by numerous members, not just the moderators. One interesting feature of Communities is that you can share into them from the web using the +1 button. As the promo video demonstrates, if you belong to the foodies Community and find a fun recipe on a random website, you can hit the +1 button and then chose to share with just that Community. The other big feature is, of course, Hangouts, a product neither Facebook nor Twitter can match. As it was with the biohackers, this video chat will be core to the new product. "Hangouts is one of the breakout successes of Google+, and we want to bring all that functionality into Communities," says Horowitz. You can get a great sense of how Google hopes Hangouts and Communities will mesh together from the video below about stargazers.