At an event in New York City today, Spotify announced a new Discover section to help users find new music on the service, a Collection section for holding all your music, and Follow, a place to keep up to date on celebrities. The new features will roll out in beta soon, and will roll out to all devices in early 2013. Spotify CEO and Founder Daniel Ek admitted that users say Spotify is great when you know what you want to listen to, but not so good when you don't — the genesis of the company's new features.

Some examples of content boxes on the new Discover page are "You listen to David Guetta and Skrillex. You might like Avicii," and "Since you follow The Knife, we recommend Deep Cuts for your collection." The recommendation engine works based on music you've listened to in the past, as well as based on artists you follow. There also appears to be a recommendation engine for showing you artists that are touring near you. Ek said, "Tiles of cover art may not mean much... We wanted to give users the context that's missing."

Spotify's new Collection feature is a new section in its app that lets you keep your music in one place, instead of in a variety of playlists in a sidebar like before. "Everyone's Spotify going to look totally different," Ek said, since it's now made up of recommendations, music you've added to playlists, and music people you follow have shared. Both Collection and Discover seem a lot like features we've seen in Rdio — which has far fewer users, and to this has point focused much more on discovery than on playlists and integration with social networks like Facebook. "A fundamental behavior on Spotify is that people listen to whole albums. A third of all playlists on Spotify are just albums people have saved. It was clear people want to listen to albums and wanted an easy way to save them, so for us [Collection view] is just about making it easier for users to save music the way they wanted," Ek said.

Spotify also announced Follow, a new section in its app that lets you follow friends, celebrities like Shakira and Ashton Kutcher, Barack Obama, and others. Once you follow some people, the music they're listening to and playlists they're creating populate your Discovery feed. You might see stories like "Shakira shared a playlist" and "Barack Obama listened to the Rolling Stones." "It's an amazing connection between artists and their fans that hasn't been possible before," Ek said. In order to keep fans on the right track, Spotify, like Twitter, displays Verified checkmarks on their profile pages. Additionally, new push notifications can alert you as soon as albums drop inside Spotify by your favorite artists.

At the end of the day, Spotify is now composed of five sections: Search, Discover, Radio, Collection, and Follow — in total an enormous revamp of the service. Spotify CEO and Founder Daniel Ek said, "We think of ourselves as punks because we're restless, and we hate when people tell us this is the way it is. We want to build something that will help artists for the long term." The new features are not only meant to please users, but also to increase discovery as a whole on the platform, which could help artists gain traction. 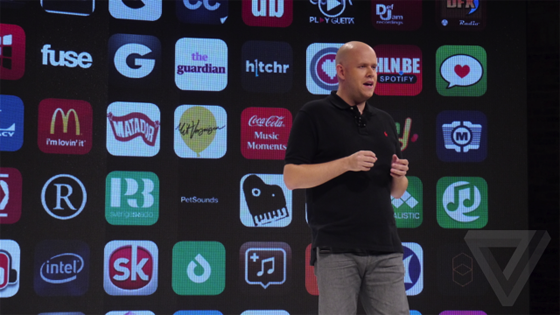 Before Ek got into Spotify's new features, he hoped to settle some disputes about the company's user base, as well as about how Spotify pays musicians. "We have over five million paid users and 20 million monthly users," Ek said, which is twice as many paid subscribers as a year ago, and one million of those paid users are in the US alone. Last we checked, Spotify boasted a whopping 24 million monthly active users, but the paid user numbers are new. "We've paid out over half a billion dollars to musicians... over 70 percent of the money we make," Ek said. "It does not cannibalize sales at all," Founder and President of Glassnote Entertainment Daniel Glass said onstage. "We tell artists to aggregate their content," he said.

"We've paid out over half a billion dollars to musicians... over 70 percent of the money we make."

"Spotify co-exists with existing download services," Ek said, "building the value of the entire ecosystem and not taking it away from somewhere else. Spotify can help break a new album." Ek added that surprisingly, Spotify users like to listen to whole albums, instead of just singles — a great sign for record labels and musicians. He highlighted the 1 billion playlists Spotify users have shared as evidence that Spotify users share more music and thus listen to more music because of the service. "We're growing in a way that benefits the whole system."

The news follows the debut of Spotify's web music player, the first time the company had ventured outside apps and onto the web, as well as Spotify Apps, branded music catalogs inside the company's desktop app. "Our mission is to bring all the music to every person on the planet," Ek said.