T-Mobile finally gets aggressive: 'You love your iPhone, but you hate AT&T'

T-Mobile finally gets aggressive: 'You love your iPhone, but you hate AT&T'

T-Mobile has just wrapped an analyst presentation that was full of more aggressive forecasts for the company than we've heard since the failed AT&T merger. If its executives have their way, 2013 will be a banner year for the carrier, with investments, plan changes, network upgrades, a big merger, and a "fun" ad campaign surrounding the launch of the iPhone.

There's a lot to unpack here, so we'll begin with LTE, which has been a thorn in T-Mobile's side. T-Mobile's parent company, Deutsche Telekom, has committed to investing $4.7 billion in network upgrades in 2013 and $3 billion more each of the next two years. $4 billion of that will be dedicated to rolling out LTE, with a goal of covering 100 million people by mid-2013 and 200 million by the end of the year. The deal with MetroPCS is moving forward, and T-Mobile says that it fully expects to have regulatory approval in the first half of 2013. 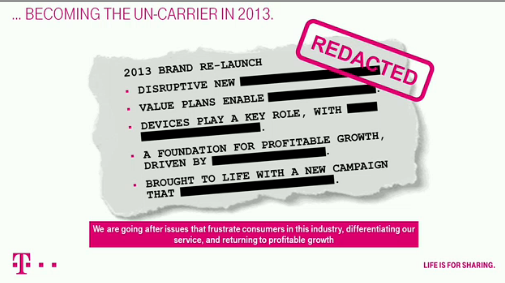 Increasingly, an LTE network is par for the course here in the US, but T-Mobile is planning on shaking things up a bit more in a bid to gain traction. It centers around what the company calls "becoming the un-carrier," and T-Mobile accompanied its talking points with a tongue-in-cheek slide detailing a brand re-launch. We imagine the central piece of the re-launch will be the "100% move to value plans," which are T-Mobile's plans that separate the price of your plan from the price of your phone. It could be spun as the end of subsidies, but T-Mobile won't give up on "equipment installment plans" that temporarily add some device costs to your bill in exchange for a lower initial cost. T-Mobile says that 80 percent of its current sales are already value plans, with 1.7 million customers already bringing their own iPhones to the network.

Last but certainly not least, Deutsche Telekom's executives were acting positively impish when discussing the impending release of Apple products on T-Mobile in 2013. They're planning a large ad campaign that was repeatedly referred to as "fun" and will almost surely be designed to poke at the other carriers. The idea T-Mobile is going for is "You love your iPhone, but you hate AT&T," the company told analysts, and even made vague references to proving pundits wrong and forcing news reports to issue "retractions" on their predictions.

We're not sure exactly what that means, but T-Mobile is embracing its underdog status. T-Mobile is hoping to set itself up as a truly different alternative to Verizon and AT&T, but becoming a truly viable alternative will mean executing on all of the plans it laid out today.

More from this stream T-Mobile becomes the 'Uncarrier', drops contracts and launches LTE