A powerful earthquake just shook my home city of Tokyo.

Of all the countless notifications that prick my ears throughout a working day, there's one that never fails to chill my blood — the distinctive siren of Yurekuru Call, a popular mobile app that alerts you to oncoming earthquakes in Japan. Yurekuru (the name roughly translates to "shake coming") usually only gives you a few seconds' warning, which isn't much, but it doesn't take too long to get under a potentially life-saving table or door frame. So, when the 7.3-magnitude earthquake hit the eastern coast of Japan a couple of hours ago, I wasn't entirely surprised to feel my aging apartment creaking at the seams, even if the jolt was far stronger and longer-lasting than the majority.

6.0 to 6.8 earthquake is likely in the next 12 hours within 200 kilometers of Tokyo, Japan. (risk dangerous level)- quakeprediction.com/Earthquake%20F…

Today was different, though — I had much of the afternoon to worry about my safety. A few hours before the quake struck, someone I follow retweeted a message from a suspicious account named @earthquakejapan saying that there was a "dangerous level" of risk that a large jolt would hit the Tokyo area sometime in the next 12 hours. I'd never seen a tweet like this before, and spent some time checking out the poster's history; it linked out to a slapdash site with little in the way of solid information, and several tweets had been made in recent weeks with similar earthquake prophecies that hadn't come to pass. I was skeptical, and mentioned as much to my co-workers in the Verge private IRC channel, but since the recent tweets were the first to use the words "dangerous level" I couldn't quite shake the thought for the rest of the day.

Two hours later and my phones are blaring with alerts and I'm taking shelter under my door frame. All the while I'm wondering how on earth Twitter has given me the ability to predict the future. 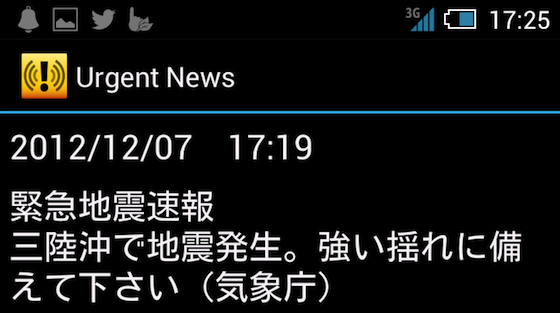 hell of a quake. that was two solid minutes of shaking here

Earthquakes loom over Tokyo like the sword of Damocles. This modern, efficient city is, like San Francisco, long overdue a giant jolt; the last one devastated the area in 1923, but they're supposed to come every seventy years or so. While experts are divided on whether last year's colossal Tohoku disaster has hastened or slowed the onset of Tokyo's "big one," one thing's for sure — the extent of the tragedy has brought the possibility to the forefront of everybody's minds. Months after the March 13 earthquake, I'd find myself waking up in the middle of the night, convinced another one was occurring. Had Yurekuru Call alerted me? Often not. I'd turn to Twitter, almost hoping to find that others had felt the same things. Sometimes they had, sometimes they hadn't.

Yurekuru Call operates on information from the Japanese Meteorological Agency, using a system called Earthquake Early Warning. Cell phones sold in Japan are legally mandated to carry these alerts, but in practice the built-in systems aren't anywhere near reliable; the threshold is often set much higher, whereas Yurekuru Call can be configured to send alerts for quakes all along the magnitude scale. I've only ever felt four or five quakes strong enough to set off my phone's EEW system — today was one of them — but I get calls from Yurekuru at least every one or two weeks. Still more quakes transpire without any alerts at all. 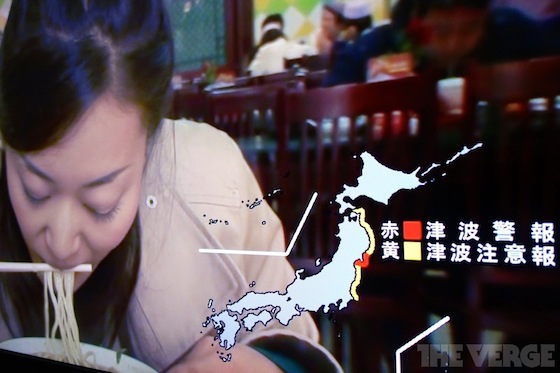 For those, I turn to Twitter. It's almost a ritual by now; you think you feel a jolt, check your timeline for confirmation, and offer your own experiences to the world. More than that, it can be an invaluable source of news on aftershocks or tsunami warnings, with journalists and civilians alike telling their stories long before the traditional media has time to mobilize. Japan's usually reliable mobile phone networks are frequently jammed in the aftermath of earthquakes, and while important information is immediately overlaid over most TV channels, internet-based services are often the only way to make sure that people you know are safe. As I write now, the vast majority of my Twitter feed is taken up by people tweeting and retweeting updates on the situation in both English and Japanese, which is a more valuable and personal source of news than any media organization could hope to provide.

The NHK announcer has a note of near hysteria in his voice as he urges evacuation to people on NE coast. #Japan #quake

As the inconsistent performance of mobile alerts has proven, earthquake prediction is far from a solved problem. The JMA says that its forecasts were accurate just over half of the time in the last fiscal year, for example. Furthermore, disasters such as Hurricane Sandy give days or weeks of time to prepare, whereas earthquakes often strike with little more than a few seconds' notice. The vast majority pass without incident or major damage, but the tragedies of Tohoku in 2011 and Kobe in 1995 have demonstrated the perils of living in one of the world's most seismologically active countries.

Random and indiscriminate as the earthquakes may be, though, I'm grateful for the inexact software that alerts me to their presence. I can't imagine what it would be like living in a country where earthquakes often struck without any warning at all, or living in a time where I couldn't instantly find out what was happening around me. It's government initiatives like the EEW system, apps like Yurekuru Call, and the co-operative nature of Twitter users in Japan that make the threat of natural disaster a lot less terrifying than it ought to be.