5 Minutes on The Verge: Yiying Lu

5 Minutes on The Verge: Yiying Lu

Yiying Lu, the designer of the timeless Twitter fail whale graphic, sits down for a quick chat with The Verge.

Aside from being a talented artist and the author of Twitter's iconic "fail whale" graphic, Yiying Lu happens to be a pretty awesome human being to just sit down and talk to. We managed to secure a few moments from her busy globetrotting schedule for a chat this week, so strap yourself in and enjoy!

How did the "fail whale" graphic come into being?

The piece that would eventually become the Twitter ‘Fail Whale’ was originally called ‘Lifting a Dreamer,’ and was a personal work – a visual greeting to my friends overseas. In 2002, I had moved to Sydney, Australia, for school and I kept in touch with a lot of friends that I grew up with in Shanghai – mostly over text, snail mail and MSN. 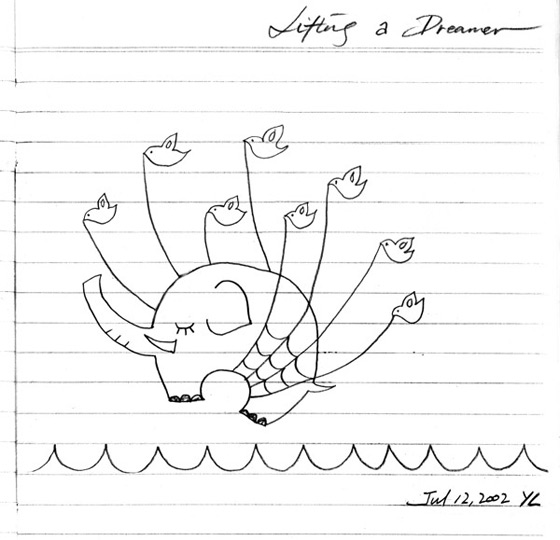 ‘Lifting a Dreamer’ originally featured an elephant, drawn with pencil! I wanted to create an e-greeting – a visual ‘comfort’ for my friends back home instead of just sending ICQ messages, and I used MSN to send the image to friends and family when I could not attend their birthdays and graduations and parties. I had this giant wish that is so heavy (the elephant), and the birds represented free spirits and good wishes. My favorite artists at the time were Salvador Dalí and René Magritte, along with Japanese and Chinese comics, and this was how I pictured delivering my good wishes to the people that I loved who were far away.

I created different animal images across different mediums for many years – thousands of them. Five years after creating the original 'Lifting a Dreamer' sketch, I was returning once again to Australia after my exchange study at St. Martins, and I created an updated version of my ‘birds lifting an elephant’ image. This was in early 2007. This time, instead of pencil and paper, I created a vector graphic with color and smaller size to send via email. Instead of an elephant, it featured a whale – since I was living in New South *Whales*. Which as I recall seemed really clever at the time! I first used it as an eCard for a friend whose party in London I couldn’t attend. At the time, one year out of university with loads of student loans, I had a bunch of my artwork featured on iStockPhoto. Biz Stone, one of the co-founders of Twitter, found this image and used it on the page that displays when Twitter was overloaded. I later learned that I replaced the LOL Cats that Twitter was then using for their error screen, and folks were apparently less frustrated when they saw my artwork, so Twitter stuck with my image, which quickly became known as the 'Fail Whale' and took on a life of its own!

How long did it take to design?

Five minutes. Plus a lifetime spent learning and creating! But seriously, about five minutes.

Where are you from?

I was born in China, and grew up in Shanghai and Sydney. I was educated in Australia and England, and currently split my time between Sydney and Las Vegas, when I am not traveling for my new startup, WALLS 360.

How do people in your home town feel about Justin Bieber?

Justin is a global phenom — EVERYONE loves Justin Bieber! Justin — if you are reading this, let's create some amazing wall graphics together for your fans around the world! ;-)

Do you still sketch things out on paper or is your design process entirely digital?

The vast majority of my digital designs start out as pencil or ink on paper. Sometimes I sketch directly into the computer using a tablet. I am very interested in the interplay between digital visual content and real-world visual content. I like the process and the transitions — starting from a pencil sketch and going to a digital scan, and then creating a digitally printed large-format wall graphic for real-world walls, which can now include an embedded QR code or AR trigger that takes you back once again into the 'virtual' world. The new possibilities for the interplay between 'virtual' and 'real-world' art are absolutely fascinating and inspiring to me!

Do you have any tools of the trade that you consider indispensible?

The world around me. And the Internet. And Tim Tams!*

Do you find tablets useful?

Yes, very much so — I use all kinds of tablets! I love Wacom, and have been using them for 15 years. I also love my iPad!

How many social networks are you a part of? How do you use them?

Tell us about your favorite websites — do you frequent them because of their design, content, or both?

My current favorite sites include Wikipedia, Smashing Magazine, Technologizer, Laughing Squid, PSFK, BoingBoing, Mashable, PandoDaily, Lost At E Minor, Wooster Collective, The Onion, FAB, AppSumo, COLOURLovers, and yes — The Verge! There are a lot! I am also looking forward to the launch of Paul Carr's The New Gambit for iPads and e-readers. And I have been spending more and more (and MORE!) time on Tumblr and Pinterest, which I find absolutely inspiring visually. My favorite sites typically feature great design AND great content.

What were the last books you read?

I have had a lot of transatlantic flights lately, and have been able to catch up on a lot of reading — recent favorites include:

- A New Earth by Eckhart Tolle

What is your first memory of the internet?

The sound from a 56k dial-up modem.

What has been the biggest change that technology has brought about in your life over the past decade?

One of my favorites quotes is from Timothy Leary: 'Find the others.' Over the past decade, technology has made it MUCH easier to connect with like-minded creative collaborators globally. And the implications of this are going to become increasingly powerful over the coming years — this is an amazing time to be a CREATOR!

How often do you check your email?