If you've read a major US paper or taken the New York subway lately, you've probably seen Google's "Good to Know" ads, which offer friendly explanations of cookies and other concepts relating to the company's upcoming privacy policy change. But after being knocked by Microsoft in an ad campaign for not "putting people first," Google is taking a more direct tack: placing web ads that claim "We're changing our Privacy Policy. Not your privacy controls" on sites like the Washington Post. 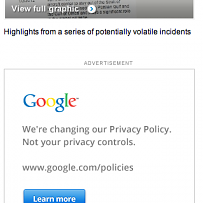 The ads link to the Google Policies & Principles page, which seeks to reassure customers that their data will be just as safe after the March 1st update. It's largely the same message that Google has been putting out in its official blog. But unlike the previous ads, it's an unusually clear admission that Google knows people are worried about the changes, which consolidate the policies of most Google services into a single document and increase the amount of information that is shared between services.