AT&T is preparing its internal customer management systems for shared data plans, but there's still no word on when these plans will be available to customers.

AT&T has been planning on launching shared data plans for some time now, but Engadget has just dug up some evidence that the carrier is getting its internal systems ready for these new plans. An anonymous tipster sent in some screenshots of a memo detailing updates to AT&T's customer management system, Telegence, that detail changes made to support shared data. While these changes would indicate that shared data should be coming sooner than later, the memo also notes that "the launch date for shared data is TBD." It's already been eight months since AT&T CEO Ralph de la Vega brought this up at 2011's D9 conference, so we're hoping that these new plans launch soon. Shared data is also in the works at Verizon, so we'll see which of the nation's two biggest carriers is the first to offer this solution. 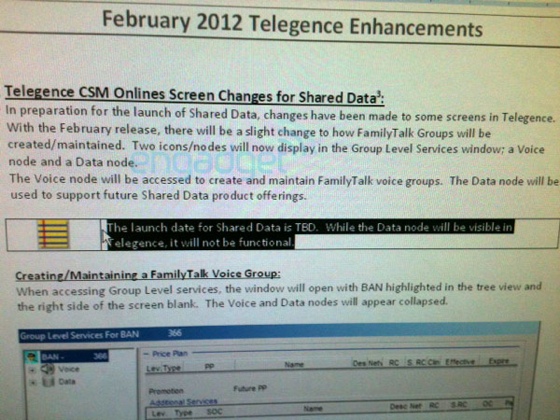