Google posted on the Google TV Facebook page this weekend, with a cryptic message promising "big announcements" on Monday.

Rumors have been flying about some big changes for Google TV, and now it looks like we're going to be hearing something official tomorrow — Google posted cryptically on the Google TV Facebook page this weekend, saying only, "Get ready for Monday, we have some big announcements!" We won't know for sure until tomorrow what Google has to unveil — we've heard rumblings of a Google-branded home entertainment device, though it could also be the yearly update Google promised back in January. Of course, we've also heard that LG is going to be the hardware manufacturer in a halo device partnership for Google TV — could we be seeing the first Nexus TV tomorrow? We'll be on the lookout for whatever Google has to show, but regardless it certainly looks like Google's making good on its promise to keep working on Google TV.

Update: turns out the "big" announcement wasn't so big after all. It's a new YouTube app. 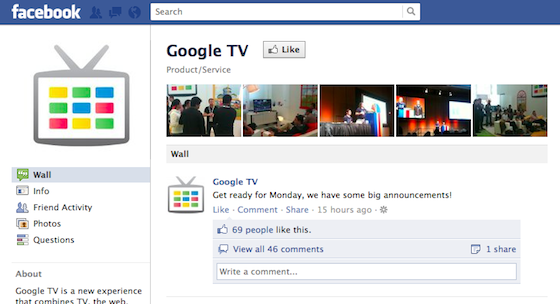