Happy Valent... excuse me, I just got a text message

Can you keep your phone away when it shouldn't be out? Probably not, but there's a better answer.

Share All sharing options for: Happy Valent... excuse me, I just got a text message

You're at dinner with your significant other, or maybe your best friend. You both lead frazzled, hectic lives filled with emails, calls, tweets, check-ins, wall posts (some inappropriate), text messages, IMs, the list goes on. Enjoying a quiet meal filled with meaningful, face-to-face conversation is a rarity — particularly these days — and neither of you are sure when the next opportunity might come.

What now? In a timely, Valentine's-themed Forbes editorial today, contributor Andy Ellwood makes the case for keeping your phone firmly stowed for the duration of your meal. "If we're being honest, and really getting down to the truth of the matter, there is just about nothing that can or will happen tonight between the coat check and finishing dessert that you need to know about," he writes.

People just don't want to see your phone come out when they're around, and I can't blame them

Realistically, Andy's right: unless you're the head of state of a nuclear superpower, there's very little that could be sent to you during dinner that would literally be a matter of life or death. But in practice, electronic communication has been so tightly woven into our lives that it can be nigh impossible for many of us to completely ignore. Products like Google Talk on Android have elevated the instant message to a realtime, full-time, ubiquitous service that promotes immediate responses to and from your contacts. Many employees these days — yours truly included — are expected to be reachable 24 / 7 in the event of an emergency. And it's not just dinner that's a problem — it's any time (and anywhere) that someone in your life expects your undivided attention. People just don't want to see your phone come out when they're around, and I can't blame them.

Ultimately, even if I ignore the vibrating alert, it's a loss for my dinner date. My mind wanders. "Who was that, and what do they need?"

But I'm not saying "phones are here to stay, so deal with it." As much as I love my mobile devices and everything they enable me to do, mankind has failed as a species if we all give up, bury our heads in Facebook and Tiny Tower, and pretend to listen to the person across the table from us with an occasional "unh-huh" interjected to loosely simulate attention.

The answer is right in front of us. It has been for years, backed by research, technology, and a long string of products that virtually no one has heard of. "Glanceable information," it's called — pioneered by companies like Ambient Devices, which grew out of projects over a decade ago at MIT's famed Media Lab. The concept is devilishly simple: present the critical information that you need to have in a beautiful way that requires no brain power to interpret. (Ambient's got a nice page that breaks it down.) 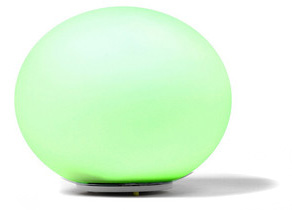 One of Ambient's first products was the "Orb," a frosted glass sphere fitted with multicolor LEDs. By registering the Orb on Ambient's site, you could choose a single type of information to be conveyed — temperature, weather forecast, a stock symbol, news alerts, so on — and different colors and light patterns would be used to indicate it. Once you learned what those colors meant, you could immediately "know" a data point that was important to you simply by glancing at the device. And to the casual observer, it just looked like a decorative trinket, which was a big part of the appeal.

Ambient's original vision — selling products like the Orb directly to consumers — ultimately wasn't successful for a variety of reasons: it's a very foreign concept, obviously, and the units connected to something called the "Ambient Information Network" that piggybacked on a nationwide pager (yes, pager) network. These days, Wi-Fi would make far more sense.

That said, the concept of glanceable information is as fundamentally sound as it ever has been, and arguably more important than ever. Facebook and Twitter didn't exist when Ambient debuted in 2001, and text messaging had yet to take off. Filling your life with glanceable devices is an obvious way to stay connected without being conspicuous, but more importantly, they become second nature after enough use — you're devoting nearly zero brain power, consciously or otherwise, to interpreting what the devices are telling you.

Be that as it may, I don't know that the Ambient Orb will ever make a comeback. I doubt it. But many of us already own something similar: the humble wristwatch is one of the oldest "glanceable devices" in the world. It's perhaps the only gadget in our lives where we can interpret all of the information it's conveying to us in under a second. It's wearable, so it can go wherever you do. And it's got a very real opportunity to fill this gap, heroically saving millions of relationships in the process.

A number of companies seem to understand that there's a very real opportunity to finally realize the glanceable dream through the wristwatch. We've taken a look at some of them: InPulse, MetaWatch (recently spun off from Fossil), and WIMM Labs have all brought products to market in the past few months, and the proliferation of iPod nano bands like LunaTik suggests that there's a willingness among consumers to reimagine a product that many considered to be dead just a couple years ago.

All of these products will be dead unless these things happen

InPulse, MetaWatch, and the WIMM One all share one very important attribute in common: they connect to your smartphone and deliver customizable alerts through vibration, sound, and high-resolution display. In other words, they let you keep your phone in your pocket. You still may not be able to respond to incoming messages without falling outside the "glanceable" envelope, but more importantly, they let you monitor your barrage of incoming communication no more conspicuously than checking the time. I'm not necessarily arguing this is a stream of communication that you must stay on top of throughout your intimate meals — but in our information-overload world, there's a peace of mind knowing that you're not falling behind. It lets you concentrate on what's important, the person seated in front of you. It keeps your blood pressure down, it keeps your ulcer at bay.

These watches all have their quirks and problems. They're not attractive. "Normal" humans won't wear them (in fact, two of the three are billed specifically as developer kits anyway). But the underlying concept — the same concept that underpins all of them — is solid, and it's important. It's a concept that needs to be developed, explored, and commercialized in a way that everyone can enjoy, and there are four things that need to happen in order to get us there:

This needs to happen immediately. The products are out, the companies exist, Bluetooth 4.0 is in retail devices. There's no time to waste. Mark my words: all of these products will be dead unless these things happen. Indeed, from a consumer perspective, the entire category will be dead.

Trust me, the person seated across from you at dinner this evening doesn't want that.