50 Cent's first headphone offering takes on the venerable Beats by Dre, but can they beat the Doctor at his own game?

The first news of a 50 Cent headphone line came at CES 2011, where the hip-hop mogul announced a partnership with Sleek Audio for the Platinum line of wireless headphones. Just a few months later Sleek confirmed that the parties had terminated their agreement, and it was revealed that 50 started his own company, SMS Audio, to make a full line of audio products. The Sync by 50 is the company’s first headphone offering, featuring an ostentatious design and Kleer wireless technology — just as the Platinum line was supposed to. The $400 headphones are set to go head-to-head with the venerable Studio Beats and Wireless Beats by Dre, but can 50 beat the Doctor at his own game?

It feels like the Sync by 50 headphones were designed by someone who still uses the term "bling bling." Available in both white and black, they have a glossy plastic enclosure with metallic chrome trim and aqua accents throughout. The plastic is definitely cheap-looking — I would've liked to see something more high-end given the price. A blue status indicator illuminates a stylized "S" on each ear pad, slanted ever so slightly so that it’s level with the ground when on your head. The headphones themselves don't rest on your head at a perfect ninety-degree angle, but the angularity of each "S" corrects for the difference and makes them appear parallel to the ground.

Though they are large, the Sync headphones aren’t particularly heavy, and I actually found them quite comfortable. The plush memory foam pads are mushy and soft, and the curvature of the entire unit seems to result in just the right amount of pressure on each ear. Each side can be extended around one inch in length, and friends who tried them on were all satisfied with the fit. The band has the right amount of give to provide enough of a seal to help keep out unwanted sound, without being uncomfortable. I could foresee them stretching out over time, however, which could become a problem for leakage down the road.

The Studio Beats by Dre headphones fold up for more compact storage, but the Syncs don’t enjoy the same luxury. Not folding makes the Syncs more difficult to store or transport, but it also means they don’t need any hinges, which improves the build quality significantly. The main body is sturdy and can withstand a good bit of flexing, though there is slight creaking if you start to over-extend. The lack of fragile hinges also makes these easy to take off or put on with one hand. I never felt the need to carry around the enormous case for safekeeping, and didn’t have any problems after tossing the headphones into a backpack unprotected. They seemed to survive a few falls in my apartment, but I wouldn't suggest dropping them repeatedly on cement or pavement. 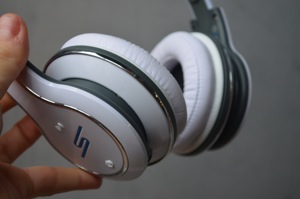 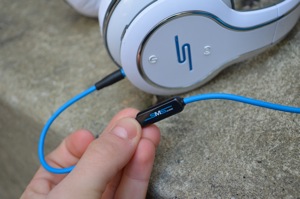 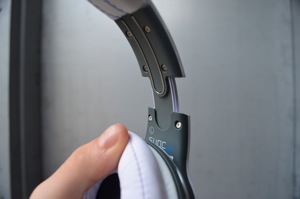 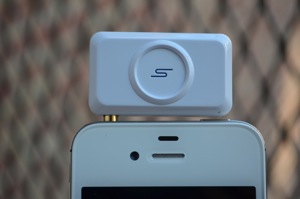 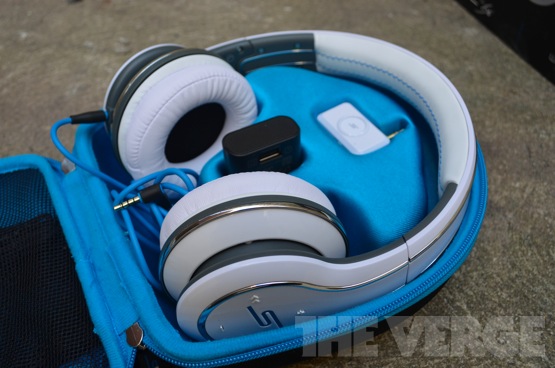 The Syncs come with a detachable cord that has an inline microphone, plus a single button for iOS controls: click once for play / pause, twice to skip forward, hold down for Siri, and so on. However, they can also be used wirelessly thanks to built-in Kleer technology, which has been appearing on niche audio devices for years but hasn’t seen widespread adoption. The spec promises lossless sound quality and lower power consumption than Bluetooth, but it also requires a clunky, included dongle. It has a 50 foot range and will transmit audio from any device with a 3.5mm headphone jack.

The dongle is about the size of a matchbox and has buttons for power and sync, along with a Micro USB port for charging. That's right, you need to charge the headphones and dongle for wireless listening. The dongle's construction leaves much to be desired, especially given its purpose: the 3.5mm plug wobbles along the bottom, giving the impression that it could snap off with even a modest amount of pressure. The positioning of the headphone connector on the left side means that it covers the iPhone 4’s sleep / wake button most of the time, but there’s nothing else attaching it to the handset’s body so it can be pivoted quite easily. It’s large enough to be annoying, but still small enough to lose: I actually misplaced it during my testing and was confined to wired listening — at least until I found the dongle in a jeans pocket a few days later. The wireless option is supposed to be a major advantage for 50's headphones, but poor execution almost makes it not worth the trouble. Plus, at $50 to replace, it’s not a cheap item to lose.

Up to four different pairs of headphones can be synced to the same receiver, meaning four people can listen to any one audio source in tandem. Unfortunately, I couldn’t test the feature for myself, since I only had one pair of Kleer-capable headphones. Still, the feature should work with offerings from any manufacturer that uses the standard, be it SMS Audio or not.

Each earcup has built-in controls, though they don’t actually work as you would expect. The left ear has a power button and a "Bass boost" mode control, while the right has volume controls and a forward / back button. Since these use Kleer instead of the ubiquitous Bluetooth, profiles like A2DP and AVRCP are not supported. That means you can’t stream wirelessly and control your music at the same time, even if your device has Bluetooth.

The experience is seriously disjointed and can get quite confusing. When you're listening via the included cable, you can use the in-line microphone button to control play / pause and skip forward / back, but on-ear controls don't function. When wireless, you can only adjust the volume level on-ear but can't control playback remotely at all. In fact, the skip forward / back buttons are only functional if you purchase a different Kleer dongle for a USB port or Apple dock connector. SMS Audio sells a Kleer USB adapter for $80, but it’s even larger than the included 3.5mm dongle and works with fewer devices. 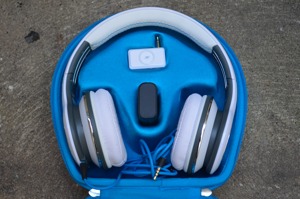 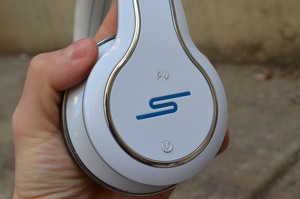 The pairing process was quick and easy, and after a few seconds the blue S logos on the earcups began blinking in tandem, signaling that the connection had been made. (Holding down the previous track button for a few seconds puts the headphones into "airplane mode," which has no other purpose except to turn the lights off but could be useful for tricking pushy flight attendants.) Once paired, streaming audio is as simple as plugging the dongle into anything with a 3.5mm jack and pressing play on your device. So long as both the headphones and dongle are charged and powered on, you can listen wirelessly to almost anything with a headphone jack.

Most celebrity-endorsed headphones have been berated for terrible sound quality despite premium pricing, but I was pleasantly surprised by the Sync's performance for the most part. Though wired performance slightly bests wireless, sounds were surprisingly good and crisp both ways — though there are caveats. I listen to bass- and synth-heavy electronic music for the most part, and sounds were punchy and full overall. At high volumes, there's a slight tinny quality to the sound, plus a bit of distortion.

At lower levels, audio tended to sound a bit airy, lacking that same oomph that appeared as the level increased. I use a pair of similarly-priced Westone 4 in-ear monitors regularly, and when the volume levels were properly balanced, I was relatively satisfied with 50’s offering. The opening progression of Skrillex's "Bangarang" sounded quite good, with the delicate staccato sounds all appearing distinct and punchy. More bass-heavy songs tended to be a little less defined, but almost everything sounded decent. TV shows purchased on iTunes did not sound particularly good, as voices sounded unnatural and flat overall. If you’re a hardcore audio enthusiast, you will not be satisfied with the Syncs. This is not what $400 headphones should sound like, and it's a serious problem. Kleer is supposed to be better than Bluetooth, but its inclusion here results in nothing but negatives.

Volume control is a major issue for the Syncs, and there seems to be a different level for every different device at which audio starts sounding washed out rather than just feeling louder. Managing volume is also a huge pain: things aren’t terrible when you're plugged in, but when you’re listening wirelessly you’ll have to control volume separately on both the headphones and your player. If you're using a desktop app like iTunes or Spotify, there's a third level thrown into the mix. This is a major pain point for almost all headphones, but swapping the dongle between devices and constantly adjusting levels proved to be quite frustrating. Each time I rotated between devices, I was forced to tweak the volume levels to optimize sound. I didn’t experience any real distortion, but there’s definitely a sweet spot for optimal sound quality and it’s a delicate balance to achieve. I found that it was better to leave the levels somewhere in the middle on the device-side, and fine-tune the volume level on-ear.

Built-in "Thumpp" bass-boost technology claims to enhance the bass in any track for a "body-shaking" experience, but the effect was minimal or barely noticeable during testing. To me it feels more like a marketing ploy than an actual bass-enhancing breakthrough.

50's trying to unseat Dre, but his headphones under-deliver

Sync by 50 is a decent first effort from SMS Audio, but it is a seriously flawed product for many reasons. The ideas are right but the execution leaves much to be desired: their large footprint and garish design is the opposite of understated; wireless listening is supposed to be a major selling point, but requires a clunky, easy-to-lose dongle; and the built-in controls don’t always work. Sound quality was better than I anticipated, but there are definitely better alternatives if you’re looking in the $400 range — both in-ear and on-ear. The Westone 4 is my go-to for a combination of sublime sound quality and comfortable design, while Sennheiser makes on-ear models in a similar price range with far better sound quality. These can't really even compete with the Wireless Beats, since they don't require a dongle and cost over $100 less. SMS Audio didn’t knock it out of the park with its first flagship offering, but it looks like a good starting point if the company can refine and improve the product moving forward.