The patent on the MacBook Air that wasn't

Share All sharing options for: The patent on the MacBook Air that wasn't

On Tuesdays, the US Patent and Trademark Office publishes all of the patents granted for the week, and this week that list included a series of patents issued to Apple — 19 to be exact. Among those patents was one that many around the web have labeled as the MacBook Air patent. Actually, that's not the case at all. The subject patent is US D654,072 and it simply doesn't cover the overall design of the MacBook Air.

With design patents, it's all about the aesthetics shown in the drawings (there isn't any real written description of the invention) and, more importantly, how those design features are specifically drawn. It's terribly nerdy, but it's worth examining in this case, so let's take a look at the main drawings, and what these drawings actually afford Apple in patent protection.

Here are a couple of representative drawings from the 'D072 patent that tell the real story: 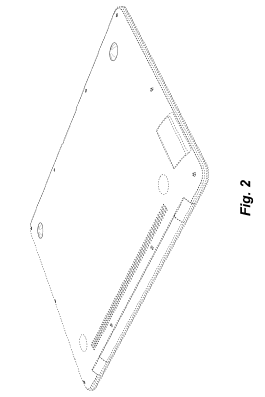 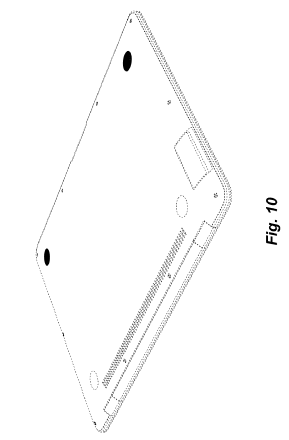 Under US patent law, and the law of most other countries, the dashed lines in design patent drawings provide context, but do not at all define what is patented. Only the structures depicted in solid lines provide insight into the patented feature. You can see from the drawings above that the only thing that is shown in solid lines is the front feet of the notebook. The rest is pretty and contextual, but otherwise meaningless.

Oddly enough, this particular design patent really only covers the specific look of the front feet. That may seem even more bizarre than a patent on the MacBook Air, but that's what we've got here. To the extent we're concerned about whether or not Ultrabook manufacturers can work around this patent, there's at least one solid alternative: don't include those types of front feet on the notebooks — controversy avoided.