Flash photography is a scary subject for many beginning photographers, but even for experienced shooters it can lead to headaches. As for myself, I fought with flash for many years before it finally started to make sense. Understanding not just how to properly expose your flash photos, but also how flash is inherently different from ambient light, is key to creating solid images with your speedlight. If you have a DSLR camera and have been afraid to delve into flash photography, then this guide is for you, whether you’re the family photographer, a weekend warrior, or an aspiring professional. If you missed Part One, I highly recommend you read it first as it goes over some basic principles that carry forward to Part Two. As before, this guide is written specifically for DSLR camera owners with external speedlights, although generally the information within will apply to any camera that accepts an external flash. 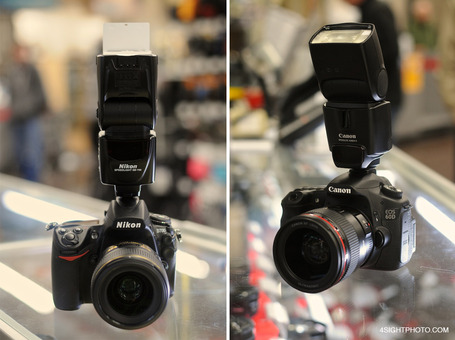 Forget what you know about exposure: flash vs. ambient light.

If you've ever been around a studio photographer while he is working, you may have heard him call out things like "F-five-six" while checking his strobes with a light meter. You probably haven't heard him say a shutter speed; only the aperture. Wonder why that is? Before understanding how to set your camera and flash for a correct exposure, it’s important to understand that the light cast by a flash is a completely different beast than ambient light. Whether you’re accustomed to working outdoor under the sun, or inside with fluorescent or incandescent light, you have likely grown comfortable with how your exposures change when you make adjustments to your shutter speed, aperture, and ISO. You know, for example, that a shutter speed of 1/125th of a second will let in roughly half the amount of light as a shutter speed of 1/60th of a second. You also know that anything much slower than 1/60th of a second will result in blurry images (image stabilization/vibration reduction aside). This is fine and dandy when working with constant light, but guess what? Your flash doesn’t care. That’s right, whether you’re shooting at 30 full seconds or 1/250th of a second, your camera can see exactly the same amount of light from your flash. This is because a flash is only "on" for 1/1000 to 1/40,000th of a second (depending on output power). Not only will your camera's sensor receive the same amount of light from your flash regardless of shutter speed, but the flash will freeze any action that would normally be blurred by a slow shutter speed. Aperture and ISO are the only variables that we can use to control the amount of light the camera will see from our flash. And this is the basis for how to balance your exposure between flash and ambient light: use aperture to control flash and shutter speed to control ambient light. Keep in mind, your aperture setting (and ISO, for that matter) will also affect the ambient light, so any change there may require a change to shutter speed to compensate.

Wait what? Yes, you read that right. If you're familiar with shooting your camera in manual mode, you may have noticed when you put a flash on your camera that you suddenly couldn't choose a shutter speed faster than 1/250th of a second. This is because DSLR cameras employ what's known as a rolling shutter. The shutter is made up of a leading and trailing curtain: the first one opens the gate, the second one closes it. That's cool and all, except that after you reach a certain shutter speed (1/250th on most cameras) the trailing curtain starts moving before the leading curtain has finished, meaning the entire surface of the sensor is not being exposed at the same time. Ambient light doesn't care one bit, but for a flash firing at around 1/8000 of a second, this is bad news: it can't expose your entire sensor. Man, wouldn't it be cool if you could use a flash and shoot at a high shutter speed? Oh wait, you can! With a modern speedlight and camera, you actually have a way to bypass your sync speed limit. If you elect to turn "high-speed sync" on, you will be able to shoot with a flash at any shutter speed. Modern speedlights are capable of pulsing their output over the duration of the rolling shutter to achieve an evenly-exposed result. This means that, yes, you can shoot outdoors in sunlight with a wide aperture and still use fill flash. There is a lot of math that goes on here to make this work properly, and I admit that I don't understand it. But it works. (If you do elect to use high-speed sync, keep in mind that you will not be able to get full flash power at shutter speeds that require your flash to "pulse.")

Just like your camera, your flash has it's own exposure modes. If you want the machines to do everything for you, set your camera to Auto or Program and your flash to TTL. TTL stands for through the lens metering. You camera's light meter will take in the ambient scene as well as light from a pre-flash to determine the output power of your speedlight. This generally doesn't lead to aesthetically pleasing results, but technically you will get a correct exposure. I've found leaving a camera in any automatic mode will result in the background being too dark and the foreground—lit by the flash—being too light. But you know how to fix this problem. Put your camera in manual mode and use your shutter speed to balance your ambient light. My rule of thumb: take a test shot without flash and adjust your shutter speed until you get a pleasing result for your background. (Don't worry about going too slow—remember your flash will take care of freezing subject motion.) Then try a shot with your flash and see what happens. You should end up with a nicely balanced exposure: the background will not be too dark, and the flash will have popped just strong enough to fill in your subject. If you're in a situation where you're moving around, but remaining in the same room, this will guarantee you get a balanced exposure wherever you go: the flash will adjust its output based on your subject, but your camera will let in a fixed amount of ambient light so your background stays consistent. TTL mode will also allow you to set a flash exposure compensation. Much like using exposure compensation on your camera when in Program mode, this will still leave the flash in automatic, but consistently under or overexpose by the specified value. Putting your flash in Manual mode will give you full control of its power, but keep in mind if the distance between you and your subject changes, you will have to adjust the flash power accordingly. This can be difficult in a situation like a birthday party or wedding reception. I shoot Nikon, and I find myself leaving my flash in TTL mode 95% of the time when it's on my camera. Nikon has a particularly good flash metering system, but I tend to shoot with a flash exposure compensation of -0.3EV. I know some Canon shooters who prefer leaving their flash in Manual because they don't trust TTL at all. I recommend trying it out both ways regardless of what brand you shoot. 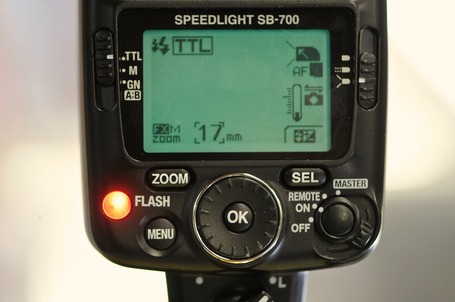 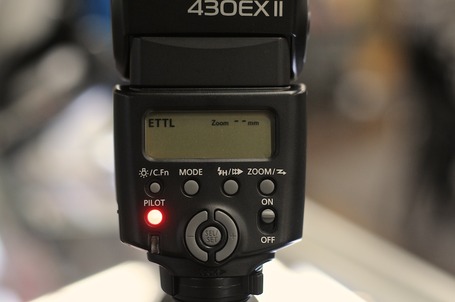 And now the fun stuff.

A speedlight is far more than a simple way to provide light when there isn't enough. Not only will it give you a fill light on bright days, or allow you to shoot at slow shutter speeds without blurring your subject, but it can also give you images that simply aren't possible with constant light. Most midrange and pro level DSLRs have the option for doing "rear curtain sync" flash ("second curtain" is the term used by Canon). Recall the explanation of the rolling shutter: one curtain opens, then the next closes. By default, your flash will fire in sync with the first curtain. Setting your camera to rear/second curtain flash means your flash will fire in sync with—you guessed it—the second curtain. Now, if you're shooting at about a 1/60th of a second or faster, this setting won't matter in most situations. If, however, you shoot a slow shutter speed, using rear curtain sync will allow you to do some pretty neat things: your shutter will open, collecting all the ambient light, and then your flash will pop, freezing anything in its tracks. A fire dancer will be frozen in the middle of rings of flame; a car's taillights will stretch out behind it as if it's going into warp. Those are just two of the more stereotypical examples you may have seen, but the possibilities here are endless.

Knowing that your flash can freeze subject motion is awesome, but the lesser-known effect of this is that it can also freeze camera motion. Normally, you probably try to hold your camera as steady as possible while shooting. Well, now you don't have to. In fact, go crazy, wave it all around, see what happens. This is especially fun in a party atmosphere if you have some other (constant) light sources in the frame: incandescent bulbs, Christmas lights, candles, whatever. Pan, spin, or—heck—throw your camera if you're up for it.* While the shutter is open, whatever light source is in the room will "paint" over your sensor, creating patterns of streaks, and then the flash will fire and freeze your subjects in the middle of it all. Try different shutter speeds to achieve different effects. And yes, you can leave your flash in TTL for this. (What's more, since you're not worrying about keeping your camera steady, so can shoot with just one hand, freeing your other hand to hold your drink.) 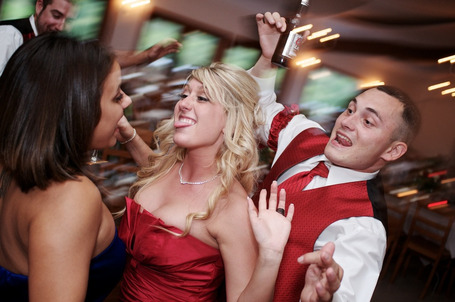 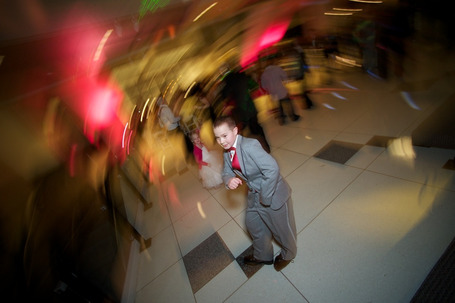 Again, if you've made it this far, I hope you got something out of this. Learning how to master your flash will take time, but don't be afraid to experiment. Only with practice will this stuff truly begin to make sense. A flash is not a crutch; it is not a last-result option. It is a very powerful tool, and like all tools it can make or break a shoot depending on how it's used. If you feel excited about getting out there and experimenting with your flash (assuming I haven't put you to sleep by now), I'd love to the see the results here! And stay tuned for Part Three of How to Be a Better Flasher, where we finally take a look at getting that speedlight off the camera.