Facebook has announced that a new group of news and media companies have signed up for its Open Graph media app program.

Facebook has today announced that thirteen new media partners have joined its Open Graph timeline apps program. The Daily Show, Huffington Post, MSNBC, and CBS Local (New York and Los Angeles) are some of the latest big-name partners to sign up. Open Graph apps are "social adverts" that automatically post a user's activity into a box on their profile page, and to a ticker on their friend's news feed. Some of the new apps allow you to view content directly on Facebook, whereas others connect into the relevant website. In addition to the current sharing features, Facebook recently detailed a new API that will allow advertisers to feature Open Graph activities alongside links and other relevant materials within users' news feeds. 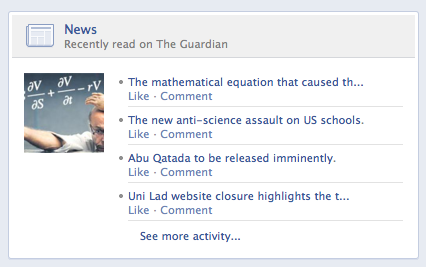 Before Open Graph, if you viewed an article on, for example, The Guardian website, you had to either manually share the link or click "Like" for your friends to know about it. Now, everything you read will automatically appear on your profile, unless you explicitly ask the app not to share a particular article. According to TechCrunch, certain apps, such as NewsCorps's The Daily, don't allow you to curate what appears on your Facebook profile, leaving you with the decision to either share everything, or not use the Open Graph app at all. A full list of the additional Open Graph apps follows: