As you all know, Microsoft announced the new Windows 8 logo. My opinion on it is simple: doesn't look bad and easily communicates the concept behind Metro and Live Tiles, but ultimately, is a missed opportunity of integration and rebranding.

Not to mention the risk of losing the Windows brand equity, as the flag has been part of it since the 90's. If you think about it, most commercial keyboards have a key dedicated to the flag, so every laptop with Windows installed on it, and every Windows Phone to date, have the flag somewhere.

The Windows logo, and specifically, the icon, in its current incarnation, is the opposite of what the Metro Design Language tries to achieve. It's not simple, at all—in fact, it's full of gradients, gloss, shadows and colors, which would be practically an abomination for the guidelines.

To be honest, it doesn't look that bad, but it's easy to imagine it'd look silly in the Start screen, or anywhere near Windows 8. It'd be as silly as using glossy, iOS style icons for the Live Tiles.

The solution to this problem might be simpler than developing a whole new look, but instead, just focusing on the shape of the Windows flag to make it cleaner and modern looking would be a better alternative. It also might be simpler because we have something to work with already: the Windows Phone 7.5 logo.

Disclaimer: not the official logo. I redesigned it to polish some aspects, like the curves on the flag.

With the full-on Metro experience, Windows Phone had to have an equally Metro logo, and it shows. It's authentically digital, with its flat color and lack of ornaments, giving it a modern, fresh and almost playful look. It also helps that the icon, centered inside a square, resembles a live tile.

This, in my opinion, is what Microsoft should strive for with their logo design from now on. Instead of reinventing the wheel, why not try to polish the image of their well-established icons?

With all this said, I propose an obvious idea for the portfolio of products and services of Microsoft, including Windows 8. Remember, Metro is a Design Language the company will use to communicate with their consumers, not just from a UI point of view.

What's most interesting is that we've started seeing the Metro treatment to some of the brands. In fact, on iOS, the Xbox LIVE app has a flat icon and bold color, just like SkyDrive, Hotmail and Internet Explorer on Windows Phone. So applying it to the Windows logo, starting with Windows 8, would be the safest, most logical step, and in my opinion, it lends to a better result than what Microsoft just announced.

If you compare the results to the Windows 7 logo, it looks like an evolutionary step, just as Windows 8 is and evolution towards a full Metro experience. It feels familiar, but is way more modern, authentic and fluid. This is not your father's Windows, but he might love it as well.

I took some of Microsoft's products and services and applied the same idea. The results are interesting, because finally, all products look like they belong to a common umbrella, which makes sense, considering Windows 8 will try to integrate many of them into a seamless experience. 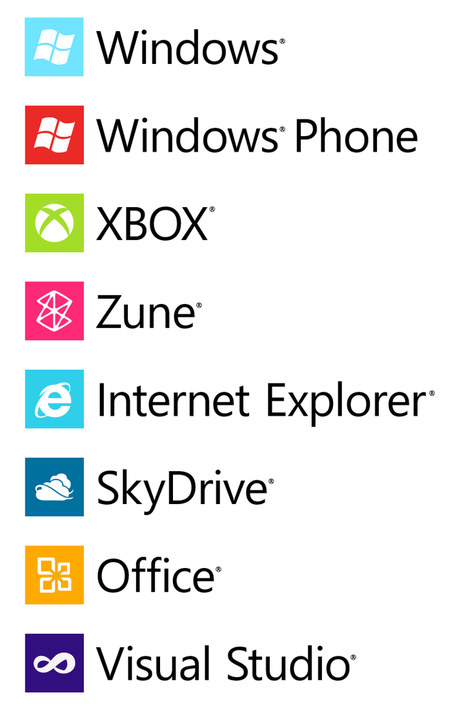 Some of these logos are trademarked while others are registered, but I took the liberty of just using the ® symbol.

There haven't been a better moment for Microsoft to start integrating products, services, design and philosophies than right now. With Windows 8, a lot of stuff will become part of each other as the software will not only be tied by the Metro UI, but the functionality: seamless integration of services like SkyDrive, Messenger, Skype, and others, will make people realize the potential of the Microsoft ecosystem.

So what better way to represent and showcase this integration than rethinking it into a cohesive, easy to understand, modern, and ultimately Metro, experience? It's not just about the Windows 8 logo, but all the services that will be part of it.

Update (2/20/2012): Some of you are concerned the Windows brand would look way too similar to Windows Phone. While I think it wouldn't be a big problem, this branding system is just the begining, and should be further explored.

Inspired by the actual logo of Windows 8, I came up with this simple idea (which isn't a definite answer to the problem), helping differentiate and elevate the Windows brand, while still being true to the guidelines of the system.

I purposefully didn't add perspective to the flag, as I think it'd be unnecesary, unless it was to be used as a dynamic identity.

Credits: Offical The Verge article and Joshua Topolsky's I feel like Microsoft just missed a huge opportunity (which inspired me to write this article).