At today’s 2012 Financial Analyst Day, AMD revealed its roadmap for mobile and desktop computing from now until 2013. There's a lot to discuss here, but in short, the company is honing its consumer-facing line down to a single family of CPUs, and will do its best to persuade us that x86 APUs are the future of the industry.

Later this year the company's poorly-received Bulldozer line will be replaced by Vishera, and there look to be no further refreshes to its high-end desktop CPUs on the horizon. it makes sense, really, given the rumors we've seen over the past couple of months, as AMD looks to distance itself as a direct competitor to Intel, leverage its graphics know-how, and work on improving its low power x86 implementations for thinner laptops and tablets. 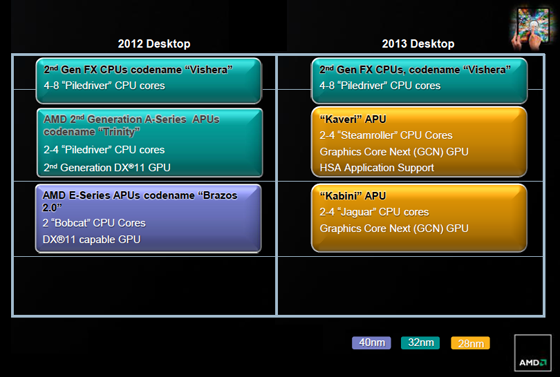 Speaking of tablets, we'll begin to see AMD's second-gen Brazos APU shortly, which will bring USB 3.0 and TurboCore to the low power platform. Another low power solution, codenamed Hondo, will launch this year, but it probably won't be much of an ARM competitor quite yet: running at under 4.5W, AMD told us it may appear in a few tablets, but will more likely be found in upcoming ultra-portable laptops.

Also due out this year are AMD's 32nm Trinity APUs, which will replace the company's Llano line. We had the opportunity to test Trinity back at CES, and came away impressed with the APU after an extreme multi-tasking demonstration. We've since heard that the low-voltage variety likely to find its way into ultra-thin laptops won't be quite such a workhorse -- the low-voltage 17W Trinity is on-par with the 35W Llano chip -- but we should at least see improved battery life there. Interestingly, both the standard and low voltage varieties are set to be available in dual- and quad-core configurations.

Two low-power 28nm APUs codenamed Krishna and Wichita were originally supposed to launch later this year, but rumors of manufacturing troubles hit last November. The two APUs are nowhere to be found on the new roadmap, it looks like the low-powered variants of Trinity will fill in the gaps in AMD's 2012 line-up. 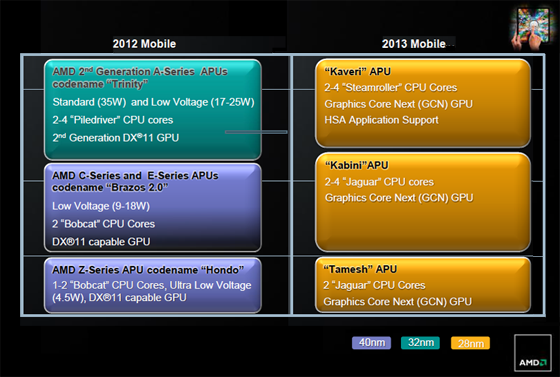 In 2013, AMD will introduce three new APUs for the laptop market, entitled Kabini, Kaveri, and Temash, all created using a 28nm process. This die-shrink will decrease heat generation and power consumption, which could potentially lead to more processing power at the high-end, and longer battery life at the low-end. The 2013 chips will be completely integrated, with no external controllers, making them fully fledged SoCs. They'll also have integrated DirectX 11.1 GPUs based on AMD's new GPU architecture Graphics Core Next, which has just debuted with the launch of the Radeon HD 7970 and 7950.

Kaveri is the high-end chip, which AMD hopes will be powering high-performance multimedia or gaming laptops. It includes HSA Application Support (a type of software-specific advanced hardware acceleration), and will be available in dual- or quad-core. Kabini will be the mainstream chip - a low voltage APU with dual- or quad-core configurations, likely to end up in thin-and-light notebooks. Lastly, Temash will be a dual-core ultra low power chip expected to have a 3W TDP. The chip will be fanless, meaning it will fit into a variety of form-factors, including ultra-slim laptops and tablets.

We've recently seen an Android tablet powered by an AMD processor, and the company has been clear that it doesn't intend to compete with Intel at the high-end of the PC market any longer. However, the competition are just as focused on getting their chips into low power devices, and AMD is playing catch-up. After a series of failures over the past few years, Intel is getting close to having a marketable product, ARM manufacturers continue to enjoy unparalleled success in the tablet and smartphone space, and are sure to go after notebooks in a big way in 2013 following the launch of Windows 8. That leaves AMD, stuck between an unstoppable force and an immovable object, and one can't help but feel it's going to be a difficult couple of years for the company.