Microsoft took the wraps off two new SkyDrive applications today. The first is a Metro style app that will take advantage of Microsoft's new Windows 8 user experience and provide access to all SkyDrive files with a touch friendly interface. The SkyDrive app will also use Windows 8 charms and and contracts to let third-party Metro applications store data to SkyDrive and share documents and photos with additional apps.

The second SkyDrive application is designed to bring a desktop version of Microsoft's consumer cloud to Windows Explorer, which we saw rumored over the weekend. The SkyDrive desktop application will allow Windows 7, Windows Vista, and Windows 8 users to drag-and-drop and upload or download data to SkyDrive right within the familiar Windows Explorer interface. Microsoft says it will limit support of uploading large files to 2GB through Explorer, and that the application will automatically sync changes to and from the SkyDrive folder in a similar way to Dropbox. 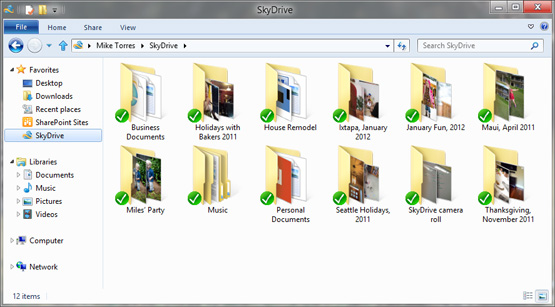 Microsoft also unveiled a new way to access non-SkyDrive files from PCs using a SkyDrive account. Fetching, available for Windows 8 PCs, will allow users to fetch documents from any PCs connected to SkyDrive. Microsoft refers to the feature as "forgot something" internally as the application will let users simply browse a home PC and retrieve and files they forgot to upload to SkyDrive. The company has added an extra layer of protection by using two-factor authentication, requiring a code (delivered to a mobile phone or alternate email address) before a new untrusted PC is granted access to SkyDrive using a Windows Live account and fetching.

The software giant didn't mention any rumored paid storage plans, but did show off a 75GB storage allocation during a video demonstration (see below), hinting that more storage may become available for free or paid customers in future. Microsoft's Metro Style Windows 8 SkyDrive application will be available with the Windows 8 Consumer Preview, whereas desktop sync and fetching are both marked as coming "soon," according to the company.