Enrico Dini is the man behind Monolite UK and its D-Shape 3D printers, which print buildings out of a stone-like material with better torsional strength than concrete. Dini's story has been turned into a documentary, titled The Man who Prints Houses.

Enrico Dini is the man behind Monolite UK, a company that hopes to start producing and selling 3D printers under the name D-Shape. However, Dini's printers aren't for printing Minecraft creations, Verge logos, or even prosthetic jaws — they're for printing buildings.

As it stands, if you want to make a complex structure out of something like stone, you need to build with Portland cement — a messy, time consuming, labor intensive and error-prone business. D-Shape's printers simplify things, using a computer-driven printer to turn a CAD model into a real structure one layer at a time. The new building method makes it easy to reproduce features like domes without any of the complicated forming needed for concrete. As a matter of fact, unlike similar technologies from the likes of Loughborough University in the UK, no cement is necessary at all — D-Shape's printers use a special inorganic binder and ordinary sand as the only raw materials. The non-epoxy binder is composed of two parts — sand is mixed with a solid catalyst, and the mixture is then exposed to a liquid binding agent. The surplus sand that doesn't get printed acts to buttress the structure, and can be reused for the next print. 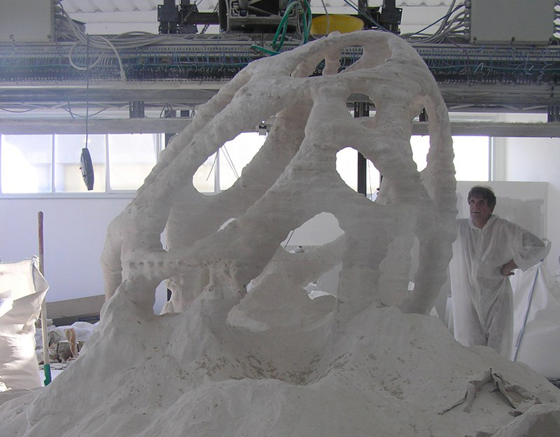 Interestingly, the sand isn't inert during the reaction like it is when concrete is mixed, and Monolite claims the finished product is a hard, strong, marble-like material — ideal for everything from park benches to one or two floor buildings. So far, the biggest structure Dini has built is the gazebo pictured at the top of the page (the picture above is of a scale model), but with a rigid enough printer structure there's nothing to stop him from printing something much larger, and his current goal is to create a "yard" printer for use on actual construction sites.

As exciting as the project is, the journey hasn't been for Dini, and Filmmakers Jack Wake-Walker and Marc Webb are working on turning his story into a documentary. The film, titled The Man who Prints Houses, looks at Dini's life and his struggle to bring large-scale 3D printing to reality.