RIM has released the 2.0 update for the PlayBook, adding a native email client, Documents To Go, Print To Go, and a new version of BlackBerry Bridge.

When we took a look at the BlackBerry PlayBook 2.0 OS back at CES, we called it "the most polished version of the PlayBook OS yet." Whether that's enough to turn sales around for the tablet is quite another matter, but it does show that RIM is able to push out new versions of the OS that is going to eventually form the basis of BlackBerry 10.

The biggest new feature is that RIM is finally including a native email client on the PlayBook, which features a unified inbox, tabs, and a rich text editor. Along with the email client, the PlayBook 2.0 OS will also pull relationship and event information from multiple sources into built-in Contacts and Calendar apps. RIM has updated Documents To Go, added Print To Go, and fully integrated the necessary hooks to let IT managers provision PlayBooks with BlackBerry Fusion. 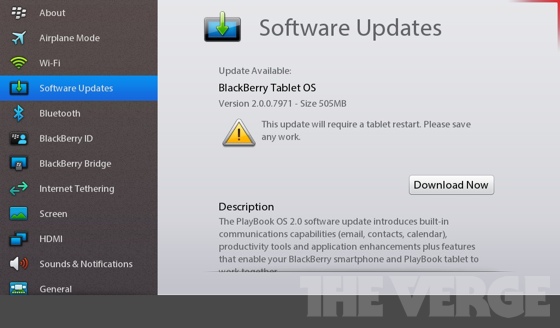 RIM also updated the BlackBerry Bridge software the PlayBook uses to communicate with BlackBerry Smartphones. It allows users to make their smartphones "remotes" for the PlayBook, with input from the keyboard, trackpad, and touchscreen all in tow. Interestingly, the remote capabilities work with many devices — including the PS3 console and Android tablets like the HTC Flyer and Motorola Xoom — that support the Bluetooth HID profile.

Today also sees the release of the BlackBerry Video Store in the US and "thousands of new apps" in the BlackBerry App World including a selection of Android apps that run on the PlayBook. RIM's also releasing an initial version of BlackBerry Mobile Fusion for the management of BB smartphones and tablets in enterprise settings.

The 505MB download of the version 2.0.0.7971 update is available now via the PlayBook's Software Updates menu.

Update: We managed to upgrade (over Wi-Fi) from the 2.0.0.7111 developer beta to the production release in about 45 minutes. It took another ten to populate the PlayBook with Twitter, Facebook, and two Google-hosted email accounts. Seeing the native Messages, Calendar, and Contacts apps light up with live data without an assist from BlackBerry Bridge and a BlackBerry handset turns the PlayBook into much more useful device. We'll be back later with deeper insight into the PlayBook OS 2.0 release and our thoughts on the state of RIM in general.