Apple has revealed details about the environmental performance of its new Maiden, North Carolina data center. Apple claims the center is the largest to receive a LEED Platinum certification.

When you have the kind of cash reserves Apple does, you can afford to spend a little to make sure your buildings are energy efficient, but the company's new data center in Maiden, North Carolina is on another level entirely. Apple claims the center is the first of its size to get a LEED Platinum certification — a measure of the building design's environmental performance, and the highest rating the US Green Building Council gives out for new projects.

The center will have two sources of power: a gigantic 100-acre, 20-megawatt solar array on the surrounding land, and later this year an equally impressive 5-megawatt fuel cell system (the largest non-utility installation out there, Apple claims) will also be coming online. When finished, the two power sources will provide 42 and 40 million kilowatt hours of juice each year, respectively — together enough power for about 7,400 American homes. Other high-performance tweaks include a water chilling system that shifts most of the chilling work to off-peak hours, high-voltage power distribution for reducing power loss, and a heat-reflecting white roof. Apple's investment in capital and equipment seems to mirror its purchases of components — spend big now to avoid uncertainty later. 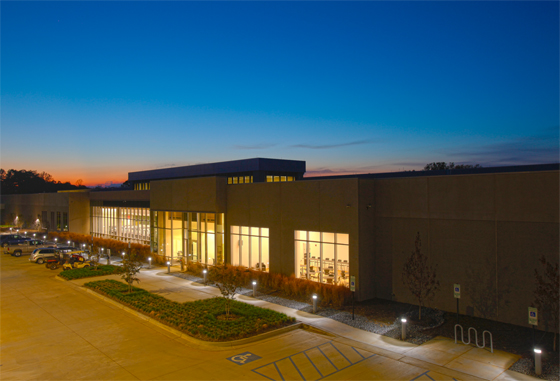