The laser-equipped, missile--busting 747, known as the Airborne Laser Testbed, completed its mission late last year, had its funding cut, and has been reassigned to the 309th Aerospace Maintenance and Regeneration Group — fondly called the Boneyard, where decommissioned aircraft go to die.

A $5 billion US military project to shoot down missiles with an aircraft-mounted laser cannon has come to an end, after years of testing that began in 1996. Funding for the laser-equipped 747 known as the Airborne Laser Testbed was cut late last year, and the aircraft has been reassigned to the 309th Aerospace Maintenance and Regeneration Group - fondly called the Boneyard — where decommissioned aircraft go to die.

Boeing's Airborne Laser Testbed — America's "first light saber" — was part of the US Department of Defense's Missile Defense Agency, and it had a chemical oxygen iodine laser that could track and destroy a missile during its boost phase. In February 2010 the project reached its height when the system successfully tracked and destroyed a missile in a test (image below). Unfortunately for the laser-equipped plane, its range was limited — so much so that it'd have to be within Iran's borders to shoot down a missile launched there — and at an estimated 100 million per year, it was prohibitively expensive to operate, even if it had completed testing. Then-Secretary of Defense Robert Gates made no bones about it back in 2009 when he said that "there's nobody in uniform that I know who believes that this is a workable concept." 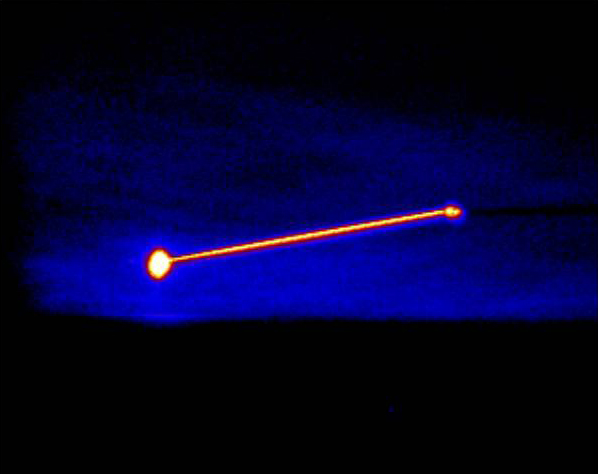 Last week the Airborne Laser Testbed made its last flight (see the suitably silent video below) to take up its final post at the Boneyard in Tuscon, Arizona. The Missile Defense Agency says that it did gain some useful insights from the project, citing that it "demonstrated the viability of a directed energy weapon for missile defense." While yet another far-out defense project may have bitten the dust, it sounds like we haven't heard the last of laser weapons just yet.