Pinterest's uneasy relationship with copyright law: what happens next

nd Pinterest is caught up in a wave of discussion about its relationship to copyright law: almost all of the images posted by its users were copied from other websites without permission, opening the door to serious copyright infringement concerns. For its part, Pinterest says it complies with the Digital Millenium Copyright Act's takedown procedures, and the company just released code that allowed content owners to keep their photos off the service entirely. But that may not be enough.

Share All sharing options for: Pinterest's uneasy relationship with copyright law: what happens next

Pinterest is unquestionably among today's hottest new startups — the social networking service lets users "pin" images they like on the web to boards they can share with friends and publish to the world at large. You can see what your friends are pinning, re-pin things they've liked, and generally look at a bunch of neat things on the internet. It's phenomenally successful, especially among women, and it's reportedly driving tons of traffic to retailers, who are all rushing to establish themselves on it.

But any popular new startup faces pointed questions about its business, and Pinterest is caught up in a wave of discussion about its relationship to copyright law: almost all of the images posted by its users were copied from other websites without permission, opening the door to serious copyright infringement concerns. For its part, Pinterest says it complies with the Digital Millenium Copyright Act's takedown procedures, and the company just released code that allowed content owners to keep their photos off the service entirely.

But that may not be enough. Pinterest is designed, top to bottom, to make copies of photos on the internet. That's a crucial difference from other sites that rely on users to post content: YouTube and Tumblr and Facebook all generally operate under the assumption that the majority of posted content is the user's own, not someone else's. Compare that to Pinterest, which presents as its primary interface a toolbar bookmarklet that rips all the images from any web page you're on: 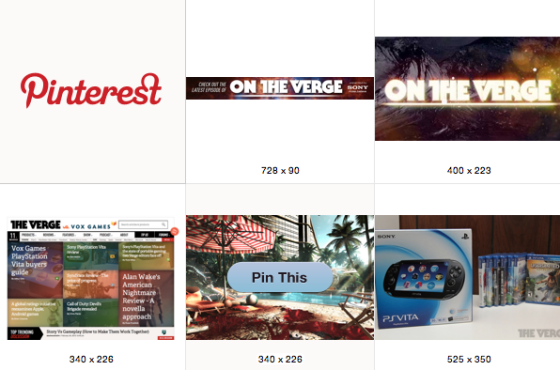 And while Facebook and Tumblr and YouTube can all happily survive on user-submitted content alone, it's not clear how Pinterest would work if users couldn't post images they didn't have permission to use: take low-level copyright infringement away from Pinterest, and you're left with a slightly clunkier Flickr. And Pinterest's "nopin" code for content owners doesn't really change the balance: Pinterest can't avoid copyright liability by shifting the burden of preventing infringement to content owners, much like you can't walk around punching the air and avoid responsibility for hitting someone in the face by yelling to get out of the way.* 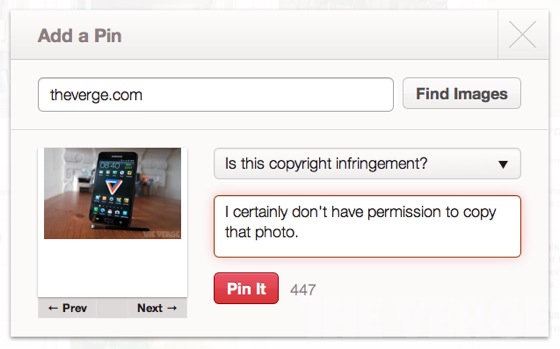 More importantly, the "nopin" solution is extremely reminiscent of Google's tense relationship with publishers that resent Google News for aggregating their stories without permission but can't live without the resulting traffic: Google provides tools for content owners to stay out of its index but no one uses them because Google is simply too important. Pinterest isn't that big yet, but it's trying to get there: retailers are actively courting the service, and the Wall Street Journal reports that Pinterest brings some small business owners double the traffic of Facebook and Twitter. That's great for stores, but not so much for content owners who aren't trying to sell something on the side — but if Pinterest gets big enough, staying out of the system may not be a viable option for anyone.

And as Pinterest grows, it's going to have to build out its copyright takedown system, which it's slowly starting to do. Complying with the DMCA's rules about takedowns is the primary way service providers avoid copyright liability — YouTube is so reliant on DMCA protections that it's built a hugely complex takedown system which is overzealous in removing content — and if Pinterest can't keep up with the flow of requests it won't stay shielded. That's going to be a big change for the company: until recently, CEO Ben Silbermann was listed as the primary copyright contact for the service. But even just properly staffing up and implementing its new formal DMCA policy will help: according to Randy Picker, a professor of copyright law at the University of Chicago, "Pinterest has to have a notice and takedown regime, but it doesn't have to be as sophisticated as YouTube's."

In the end, none of these copyright issues are likely to derail Pinterest's explosive growth — they may distract from it, and they may certainly lead to a lawsuit or two as the company learns what is and isn't acceptable usage of other people's content. But that's ultimately the story for every new service and technology that pushes the boundaries of existing copyright law — as Professor Picker says, "in some sense Pinterest is just like Xerox and the VCR," two products that were found to be legal regardless of their potential for copyright infringement. But the nature of copyright law has changed dramatically since Sony went to the Supreme Court over Betamax, and Pinterest may find the market imposes many more limitations than the law itself. In the words of Professor Picker, "if the Xerox machine was released today, we'd ask a bunch of questions about whether Xerox would have to respect no-copy watermarks."

*Here is a clip of The Simpsons that illustrates this principle nicely. It is also ironically a pirated Spanish-language video hosted on YouTube.