Sony's mysterious Dot Switch product is not a remote control, but rather a mobile app that lets you interact with live performances.

Well, Sony's Dot Switch has finally been revealed, and it's... an Android app. According to the Dot Switch site, a March 6th appearance by American pop duo Karmin on Japan's TBS network will be the first use for the app, which promises to let you "control beyond the screen." Those who use the app during the performance will see some kind of response, creating what Sony is calling an "interactive live music video." The site currently shows an empty warehouse that's being used to prep for the event, and activating the Dot Switch app makes your name scroll across a billboard on the floor — a floor that is mostly occupied by gigantic anime-style statues of Karmin. Hopefully, the billboard thing isn't all Sony has in mind when it says "interactive." The Android app is available now, and a web-based client for non-Android devices will be rolled out in the future — presumably some time before the March 6th performance. 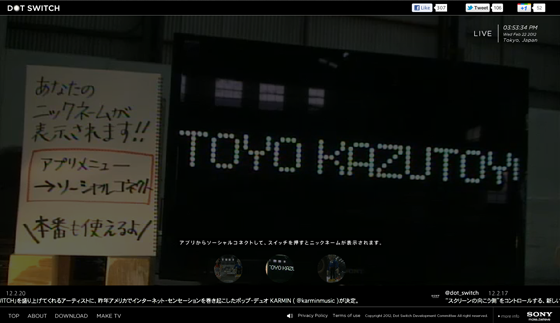