Nike+ Basketball and Training sneakers track your game, push you to compete with others

Nike+ Basketball and Training sneakers track your game, push you to compete with others

Nike has announced its Nike+ Basketball and Nike+ Training sneakers, which track your movements and rate your performance. There are some basketball-specific features, but both are designed to have you share your scores and compete with your friends with the Nike+ app for iPhone and iPod touch.

Nike is expanding its Nike+ program to target more than just joggers and runners. The company has revealed Nike+ Basketball, which works together with an iPhone or iPod touch to track "how high, how hard and how quick" you play on the court. Unfortunately the company doesn't specify exactly what's recorded, but the system will use whatever data it collects to set goals for you to complete and to rank how well you perform. Those rankings will be shared on leaderboards with your friends that are designed to make you train harder thanks to the subtle persuasion of competition. If you've got the ups, the "Showcase" feature of the app records a video of you dunking and superimposes the data it collects onto your footage. The first sneakers to be part of the program are the Nike Hyperdunk+ (above), which will be available come June 29th at an unspecified cost.

If your vertical leap is lacking, the Nike+ Training app, which works in conjunction with the Nike+ app lets you record your gym stats, set goals, score points, and compete with friends. It doesn't sound wholly unlike Nike's own FuelBand (or the Fitbit Ultra and Jawbone Up), but there's a difference: the Nike+ Training shoes have specific workouts and challenges that are displayed on your phone while you train. Like Nike+ Basketball, users are rated on their performance, and there's a leaderboard that's designed to push you to train harder when you see a buddy has topped your score. It sounds like a service that will appeal to those who are less interested in geeking out with the metrics of your workout and more interested in turning training into a point-based game.

The first Nike+ Training shoes will be the Nike Lunar TR-1+ for men and the Lunar Hyper Workout+ for women (pictured below), which, like the Hyperdunk+ sneakers, will be released in the US, UK, France, Germany, and China come June 29th. No word on pricing, but we're sure they'll carry a hefty premium over their non-digital cousins. 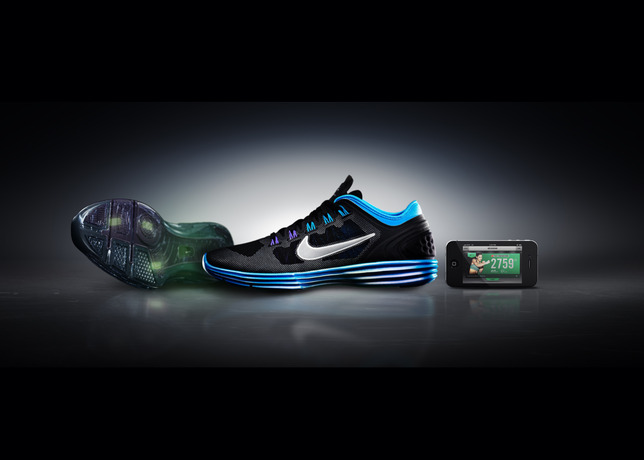