Can an email app save the PlayBook?

When we reviewed the BlackBerry PlayBook back in April, we couldn’t help feeling the device’s insides didn’t match its outsides. The PlayBook is a well-built, good-looking device, but its software was buggy, frustrating, and frankly unfinished. There was no email or calendar app (yes, really), and few apps of any kind to speak of.

PlayBook 2.0, a software update released this week, is RIM’s attempt to solve many of those problems. It adds email, calendar, and contact apps, finally making the PlayBook a functional standalone device — before, if you didn’t have a BlackBerry to connect to the PlayBook, there wasn’t much you could do with your tablet. Version 2.0 also brings compatibility with some Android apps, which is much needed for a device with few good apps to speak of. There are also some interface tweaks and enhancements, plus a lot of productivity boosts from the Docs to Go suite of apps. This update has been in the works for a long time, and other manufacturers haven’t been standing still either — does PlayBook 2.0 catch up to the tablet field? Read on to find out. 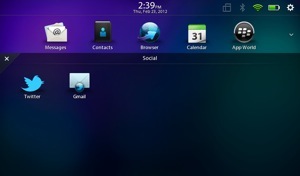 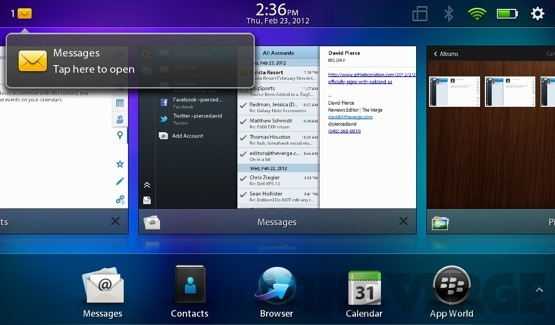 We’ve always been impressed with the basic ideas behind the PlayBook OS — it’s a lot like webOS, and that’s a very good thing from a usability standpoint. The OS is elegant and smart, relying largely on bezel-based gestures that can quickly become second nature and generally work really well. The card-based interface is smoother than ever as you manage applications — though it’s still so heavily animated that things take a while to happen, whether they’re running smoothly or not. But the first version was sluggish and occasionally confusing, and there were bugs almost everywhere you turned.

With PlayBook 2.0, the whole OS feels more stable, without many of the hangs and lags that marred the original operating system. Many of its quirks still remain, though: you’ll still constantly flip past the card you’re hunting for because scrolling is too elastic, and you’ll occasionally mash repeatedly on the same button trying to get it to respond. Little things like the volume buttons are also still off: the volume buttons press satisfyingly, but the device rarely responds, and when it does, it’s only to increase or decrease the volume a single notch. To go from zero to full sound took me 21 presses of the volume button, and many more head shakes and curse words. There’s still a long list of things wrong with this interface, even in its second version.

On the PlayBook's home screen, there's now a single application dock instead of the category sorting that existed before. You can drag and drop apps in and out of the dock (up to six live there at once), or drag one app on top of another to create a folder. If both of those things sound like they're lifted from iOS, it's because the PlayBook's home screen now seems eerily reminiscent of an iPhone or iPad's.

Speaking of iOS-style enhancements, there's a new Reader Mode in the PlayBook's browser that strips out all the formatting and clutter on a web page, and tries to present a more readable version of the page. It doesn't work very well, though: it does a good job of parsing simple pages, but anything long, complex, or heavily formatted gets disorganized, and often whole sections of text get skipped. I like the idea of a Reader mode, but frankly, if it only works with very simple pages, what's the point? The browser's otherwise fairly similar, which is a good thing — it's a great browser, even though scrolling continues to be the same awkward, too-fast or too-slow experience as the OS itself.

The keyboard's been upgraded considerably, with an improved layout and autocorrection, and prediction added to the experience. I hate that it will automatically correct a word unless you actively choose the word you typed, but that's not unique to the PlayBook. In general, the PlayBook's keyboard is really excellent, proving that RIM can make an on-screen keyboard as well as it can make a hardware one.

Before PlayBook 2.0, the only way to manage email and the like on a PlayBook was through a BlackBerry smartphone, using the BlackBerry Bridge app. That app is now much less important, since the PlayBook functions much better as a standalone device, but there are still some cool things you can do by connecting your handset to your tablet. You can easily send files from BlackBerry to PlayBook, or open a URL on your tablet that you had running on your phone. As mentioned before, you can also use your phone as a remote for your Docs To Go presentations, or use it as a mouse and keyboard for your tablet — the latter feature is pretty great if you love your BlackBerry's hardware keyboard but want to use the bigger screen of the PlayBook. 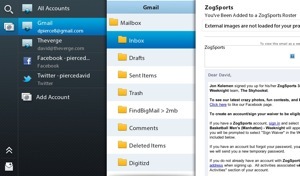 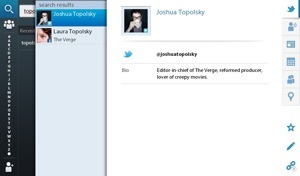 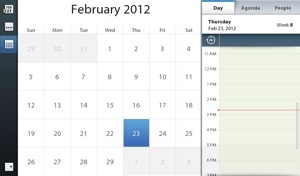 I’ve never found someone with a good explanation for why RIM, a company famous for (and arguably still in business because of) its messaging prowess, would ship a tablet without an excellent email client. Fortunately, the Messages app does finally appear with PlayBook 2.0 — though I wouldn’t exactly call it excellent. Powerful? Sure — it supports multiple accounts and a unified inbox, including Facebook messages and Twitter DMs. It also allows rich formatting in emails, and search works really well. But it has plenty of problems, too, like the cryptic buttons on the right side that make it hard to differentiate Reply All from Forward, and Move from Mark Unread. The threaded messaging is also really kludgy, and makes your inbox look unwieldy in a hurry. The notification that pops up when you get a new email doesn’t open your inbox, but instead opens another pop up letting you know you have a new message, which finally leads to the Messages app.

It’s also unnecessarily complicated to select multiple emails, and the tiled interface is sadly misleading — taking a page from the webOS book and allowing you to swipe left to right to go from accounts, to an inbox, to a message, would be great. BBM is also missing, which continues to flummox me — why wouldn't RIM want more people getting hooked on its addictive messaging service? All in all, the email app is a solid start, just as I’d expect from RIM, and I’d say Messages is at least equal with the iOS Mail app, though as a Gmail user I’m forever married to Android’s Gmail-friendly app.

The calendar and contacts app are both really well executed. They’re both integrated with Twitter and Facebook, so you’ll see Twitter handles in your contacts and Facebook friends’ birthdays in your calendar. Both apps show a lot of information at a glance, which I love — the side-by-side month and agenda views in the calendar are a favorite. You can also drag and drop events to change their times, and contacts can be automatically notified if you move a meeting. Again, it’s hard to believe these apps weren’t deemed important enough to include in the original PlayBook OS, but at least they’re here now.

Docs To Go and Android apps 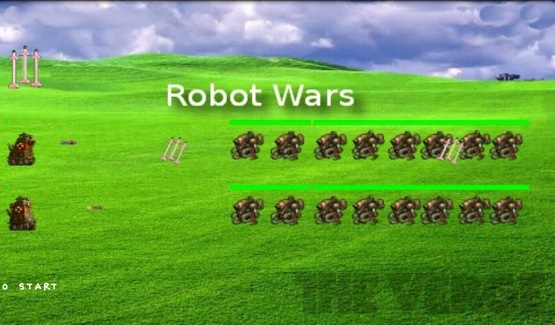 The theme of PlayBook 2.0 seems to be "get more done." In addition to the apps above, the company also updated and improved the Docs To Go suite that comes preloaded on the PlayBook. The basic apps — Word To Go, Sheets To Go, and Slideshow To Go — were incrementally upgraded, adding features like Bluetooth keyboard support and the ability to access password-protected files. You can also now use your BlackBerry as a remote for going through presentations or documents, through BlackBerry Bridge. Print To Go is the newly added app to the bunch, allowing you to "print" anything from a Windows computer (using a companion app RIM provides for Windows) and have a digital file sent to your PlayBook over Wi-Fi — that way you have an easily accessible digital copy on your PlayBook rather than a printed copy. This kind of digital repository app doesn’t seem measurably better than, say, attaching your flight receipt to an email, but it does work as an easy way to get documents onto your tablet.

When she reviewed the PlayBook in April, our own Joanna Stern called the PlayBook’s third-party app ecosystem "a desert right now, if not in number, then certainly in quality." RIM addressed the quantity portion of that gripe by integrating an Android Player app into PlayBook 2.0, and adding a selection of Android apps into the BlackBerry App World. The Android Player allows you to play Android games, unchanged, on your BlackBerry tablet. It certainly adds a lot of new apps to the ecosystem, and Android apps run more smoothly than I thought they would, but the selection is seriously lacking. Most of the available games are extremely basic, and the apps tend to be free ones you’ve probably never heard of. The idea of adapting Android apps is an exciting one, and the implementation is rock solid, but there still aren’t enough good apps to make the PlayBook’s App World a compelling ecosystem.

The quality bit of our original review is addressed, too, but only very slightly. Cut The Rope, Angry Birds, and a few other games and apps are newly available on the platform, and they're great, but they're only a few drops of water in the desert. The BlackBerry App World is a long way behind the app stores on iOS, Android, and even Windows Phone, and a bunch of mediocre Android apps isn't the way to catch up. 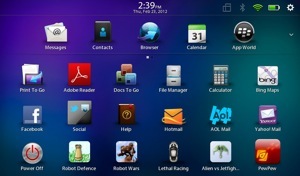 It's a legitimate Kindle Fire competitor, but it can't best the iPad

It may be labeled version 2.0, but this is the operating system the Playbook should have shipped with. It’s relatively complete, mostly bug-free, and though it’s filled with plenty of oddities, quirks, and issues none are hugely problematic. The additions are smart ones, the new apps are mostly good (though real, useful Android support is still a pipe dream), and the operating system generally works really well. But unfortunately for RIM, the PlayBook doesn’t live in a vacuum, and in the months between PlayBook 1.0 and 2.0, every other tablet manufacturer and software developer has been improving their game as well. PlayBook 2.0 will surely convince a lot of PlayBook owners to dig out their tablet, update it, and give it another whirl (if only to play Cut The Rope). At $199, it's also now a decent competitor to the Kindle Fire — it's more capable and powerful than the Kindle Fire, though it doesn't function quite as well or have anything approaching the same number of apps or content options. Still, I can’t imagine a new buyer would choose the PlayBook over an iPad 2 or Transformer Prime, update or no update.

More from this stream BlackBerry PlayBook OS 2.0: a big update for RIM's tablet