It's a streaming Swiss Army knife in an optical drive's body

Looking around my living room and office, I’m stuck between technologies: I’ve got lots of movies and music on my computer, but far more on various CDs, DVDs, Blu-rays, and the occasional cassette tape. I’ve got a different gadget for playing each thing, and no easy way to consolidate everything. The smartest solution to this problem is to digitize everything, but the easiest solution is to buy the Samsung Optical Smart Hub (SE-208BW).

In addition to being an external optical drive for computers without one (a number that’s growing rapidly), it sounds like a one-stop media streaming shop, especially for anyone else in the same boat: it can wirelessly stream your DVDs and CDs to your smartphone or Samsung TV, and can also stream files from a hard drive. It works the other way, too, backing up files from your phone or tablet to a hard drive, or burning them automatically to a disc. It even works as a Wi-Fi router or repeater. At $129, though, it’s expensive, and doesn’t offer any content other than what you already own. Is this the Swiss Army Knife of streamers, or a solution without a problem? Read on to find out. 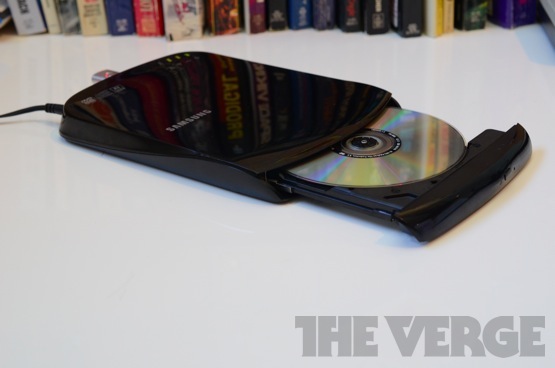 I’m guessing "unique look" wasn’t high on Samsung’s list of features for the Smart Smart Hub. That’s not to say it’s not nice-looking, only that it’s kind of boring. The Hub is a glossy (and fingerprint-prone) rectangle available in black or white, with an optical tray in the front, and Mini USB, full-size USB, Ethernet, and power ports on the back. There are four lights on the top that glow green when they’re in use, along with a bunch of logos and icons. At eight inches long and a half-inch thick, it’ll slot nicely into a desk drawer or into your home theater stack. It can be powered either via the AC adapter or the USB cable, though thanks to the incredibly short USB cable the Hub ships with, you’re either severely limited in placement options or forced to buy a longer USB cable. Of course, the product is designed to be used next to your laptop or carried in a car, so the cable is less of a problem, but more flexibility would be nice. 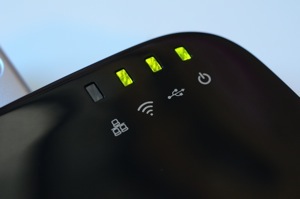 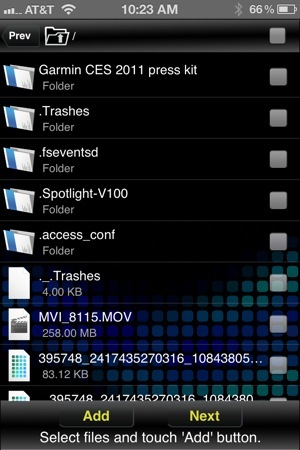 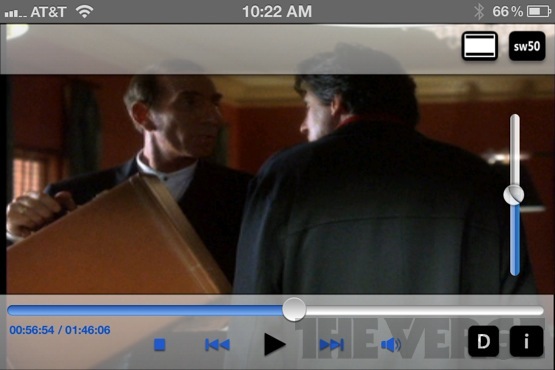 Buying the Smart Hub and using it as an external optical drive is like using a chainsaw to slice butter — it’ll do the job, but it’s major overkill. I used the Smart Hub with my MacBook Air, and it worked exactly like you’d expect: plug it in via USB, and it operates just like any internal optical drive. It’s occasionally a beat slower to respond to commands than an internal drive would be, but it generally does the job nicely. It plays DVDs and CDs, but unfortunately not Blu-ray discs, which is a shame (though Samsung says it’s working on a Blu-ray version of the drive, which should cost about $50 more). It also burns CDs and DVDs, at up to 8x speeds — again, like any other computer’s optical drive, and at three times the the cost since optical drives with these specs typically cost about $40.

The Smart Hub really flexes its muscles when it’s unplugged from your computer. When disconnected, the device becomes like a PogoPlug or a WD TV Live Hub, letting you attach any USB storage device and stream its contents. There’s no internal storage on the Smart Hub, but it’ll accept and stream from most USB storage devices, and will even stream a DVD or CD as it plays (more on that in a second).

Getting the Smart Smart Hub set up for wireless streaming is pretty simple, as long as you’re on a Windows PC — there’s no way to set it up on a Mac. Just plug it in, then insert the included setup disc into your computer. The setup wizard creates the Hub’s ad-hoc Wi-Fi network, connects to it, and registers the device, all without needing much help from you. The process can take a few minutes (finding the Hub seemed to take the longest), but it’s not difficult at all.

Once it’s set up, you’ll need an Android or iOS device, or a Samsung TV to make real use of the Smart Hub’s streaming features. There’s a Hub app in the various app stores, which is what you’ll need to use to access the drive. There are upsides and downsides here: the connection is quick and simple thanks to the dedicated app, but the app itself is kind of clunky and crash-prone. The app splits apart activities — streaming a DVD is a different section than streaming a file from a USB drive — but it goes too far, making it needlessly confusing to switch from streaming a video to playing a song, and it letting you see a file in one view but only open it in another. It was also really laggy as I scrolled through menus, and would occasionally animate as if I'd pressed a button, but wouldn't actually do anything. In fairness, I was using version 0.01.28 of the app, so there’s a long way to go before even Samsung considers this app a stable release.

That said, the streaming itself works without a hitch. Streaming files from a USB drive was as easy as inserting it into the back of the Hub and selecting "USB" from within the app's file manager. Files streamed with almost no lag, starting a video about three seconds after I selected it. I was also really impressed with the DVD performance, though that’s largely due to the sheer novelty of it: stick a DVD into the drive, select "DVD Player" in the app, and presto, the movie starts streaming from a physical disc to your handset over the air. You can skip chapters, enable or disable subtitles, switch between 4:3 and 16:9 aspect ratios, and access virtually everything else you’d get with a DVD player. Pausing or moving around happens really quickly, and though I don’t love the app’s interface for this function either, it does the job fine.

DVD streaming is a neat trick, but it almost immediately becomes clear that it doesn’t make much sense. Having your whole DVD or CD collection accessible remotely is great, but with the Smart Hub you’re still going to need to go to the drive and change the movie out every time you want to watch a new one, and that kind of defeats the purpose of streaming. I still think you’re better off taking the time to rip your DVDs, and put them on an external hard drive, where they’re all accessible from anywhere.

The Hub is clearly intended to be used when you’re nearby, connecting your device directly to the Hub via an ad-hoc connection. That normally takes over your Wi-Fi connection, so you can’t connect to another network for internet while you’re connected to the Smart Hub, but Samsung smartly enabled Wi-Fi passthrough if the Hub is connected to your router via an Ethernet cable. I didn’t notice much difference in the Hub’s streaming or backup performance whether it was wired or not, but it was nice to be able to access the internet through the device, and it seems to work reasonably well as a router or repeater. 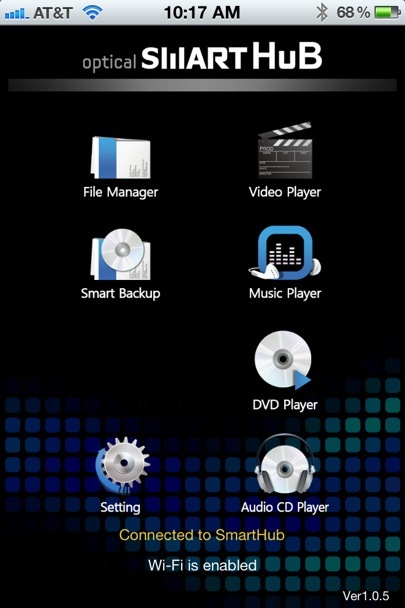 Connecting the Hub to your router via Ethernet also makes its files and discs accessible from anywhere, over the internet. There’s no pretty interface here, though, just an FTP server with your files that you can access and stream as long as you have the address. It’s an ugly system, and a complicated one — you’ll need the manual to help you through the multi-step process of getting the FTP network activated. There’s lots of potential here — being able to stream from anywhere would be pretty great — but for now it feels like a hacky solution, because it is one.

The Hub’s other function, which it does perhaps even better than it streams, is to send content in the opposite direction — from your mobile devices to the Smart Hub. The Hub has to be plugged into AC power to burn discs, but then you can send files from your phone or tablet straight to the Smart Hub, and have them backed up on an external hard drive. If you’re a mashochist who loves outdated technology, you can also burn them straight to a CD or DVD, eliminating the horrible middleman that is your computer. (In fairness, there are surely good uses for this, many of them involving the technophobes in your life.) Unfortunately, you can’t do any of this from an iOS device — it’s Android and Samsung only. The process works well, and surprisingly quickly, sending files faster than a typical Wi-Fi connection because the two devices connect directly, and it smartly sends files to a USB drive first before burning them, in case your Wi-Fi connection is spotty.

It does a lot of things, none of them particularly well

For a particular user with particular needs — an external optical drive, a wireless router, and a basic way to stream content to your phone — the Samsung Optical Smart Hub could be a nice device. But it’s too expensive to buy as an external optical drive, and too complicated and kludgy to be a primary streaming system, especially when the Pogoplug or WD TV Live Plus offer more functionality for less money. Wireless DVD and CD streaming and burning is a pretty clever trick, but it’s not going to be very practical for most people; is it worth $129.99 just to save the effort of plugging your phone into your computer, and offloading pictures that way?

Samsung reps told me that the Smart Hub is essentially a pilot model for this idea. There’s a version of the Hub that supports Blu-ray coming, and presumably if the two devices meet with some success Samsung will invest in improving the experience. I’ll be intrigued by this type of device when the experience improves, but for now, unless you really love the idea of streaming your DVD collection to your phone without actually ripping your DVDs, you should buy the $99 Pogoplug or splurge for the $199 Seagate GoFlex Satellite, and get an external optical drive separately — you’ll spend a similar amount, and each does its job better. The Optical Smart Hub is a jack of all trades, and a master of none — and for that, the price is too high.