Dropbox has updated its Android app with a new feature that uploads all your full-resolution photos and videos to the service over Wi-Fi or 3G.

Dropbox clearly wants to be your go-to service for cloud photo storage, as evidenced by its recent storage giveaway for beta testers of the new automatic camera import feature, and now it's expanding into the mobile space. A new version of the Dropbox app hit the Android Market today, with an iOS version on the horizon, and it stores all your photos and videos at full resolution in the Camera Uploads folder at the touch of a button. That's the same folder used by the desktop app, meaning it's probably going to get pretty cluttered, but Dropbox is positioning the feature as a backup tool as much as anything. The files can be uploaded via Wi-Fi or cellular data, though the latter might put quite the strain on your packet limits. One thing you might not have to worry about is storage — we've heard rumors of Dropbox integrating 50GB storage into some upcoming Android phones, and you can get up to an extra 3GB today by testing out the new feature. 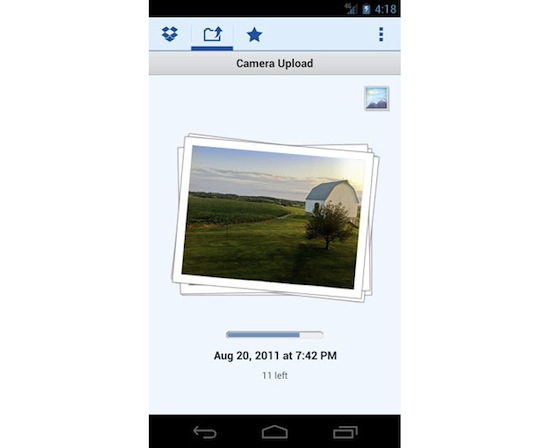