A roundup of the new products announced on day zero of Mobile World Congress.

It's been a busy day here in Barcelona — Mobile World Congress hasn't officially started yet and we've already seen over twenty new products announced. Huawei went high-end with the MediaPad 10 FHD tablet and the Ascend D quad smartphone. Elsewhere, Sony debuted the mid-range Xperia U and Xperia P smartphones, and announced international availability of its Xperia ion for the first time. Also out in force was LG, who showed off a slew of new devices, including the megalith-like Optimus Vu, before HTC unveiled a trio of new handsets named the One S, One V, and One X.

You can find all of the newly-announced products in our database ready for you to browse and contrast using our comparison tool, and we've set up a little face off between devices from Sony, HTC, LG, and Huawei to get you started below. 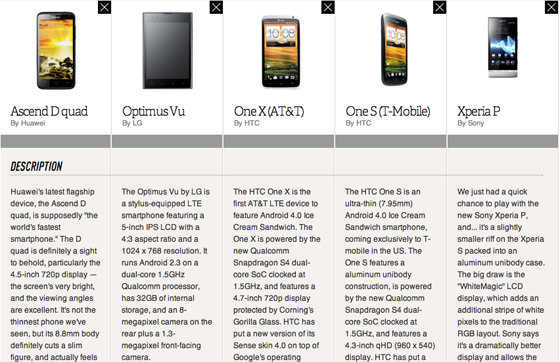