HTC One X and One S thickness comparison

HTC One X and One S thickness comparison

We've done a direct comparison of the thickness of the HTC One S and One X, two very similar devices separated by 1.1 millimeters.

One thing that really struck us when we first approached the hands-on area at HTC's press conference today is that it's genuinely difficult to tell the difference between the One X and One S at first blush, particularly if you don't have both of them handy at the same time. Thanks largely to a lower-res AMOLED display, the One S is supposed to be considerably thinner — 1.1 millimeters thinner, to be exact — but in reality, you really need to be looking for the variance. HTC has a long reputation of making thick devices seem thinner than they actually are through creative use of contoured edges (the Sensation, for instance), and the One X's sloped polycarbonate shell seems to pull off the same magic trick.

See another show of the two flagships — this time in color-matched versions — below. 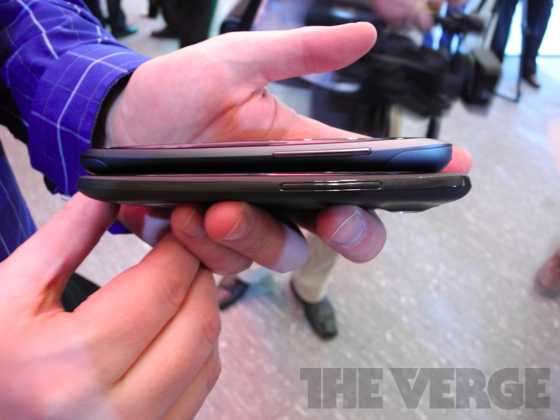