Adobe Photoshop Touch for iPad: the future of content creation?

Adobe Photoshop Touch for iPad: the future of content creation?

Adobe Photoshop Touch for iPad is out now on the iTunes App Store. The app boasts much of the same functionality as desktop Photoshop, but wraps it all in a touch-friendly package.

Adobe Photoshop Touch has been available for Android tablets since late last year, but after a brief early appearance in the New Zealand iTunes store, the software is officially out for the iPad today. You can purchase the app for a one-time fee of $9.99, though it will be included with Adobe Creative Cloud when the subscription service launches later this year. While the full suite of Adobe touch apps — Kunler, Collage, Debut, and Proto — are still slated to hit iOS "in the coming months," Photoshop is the second offering for Apple's tablet after Adobe Ideas. The app wraps familiar features from the desktop version of Photoshop in a tablet-friendly package that's surprisingly functional and easy to use. 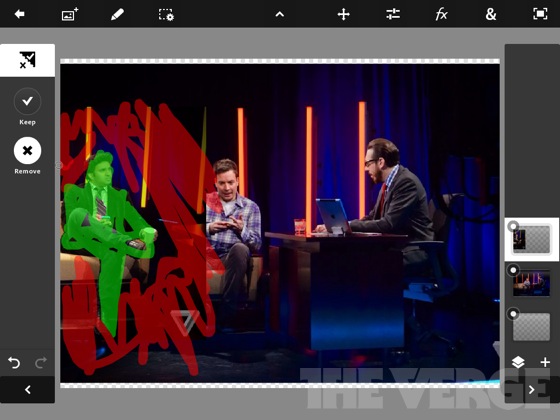 The app employs a simplistic design with a dark gray and black interface and large finger-friendly buttons. The tools and layer panels dock to the left and right sides respectively, and a row of editing controls runs across the top. All of the panels can be collapsed for a more minimal workspace. In addition to familiar tools like that lasso, clone stamp, and blur / smudge, Adobe's "Scribble Selection" tool works much like a touch-optimized magic wand. Just as with the Android app, you "scribble" over the areas you'd like to keep and remove (see above), and the app refines the selected region as you add more detail. The tool won’t replace a mouse or even dedicated pen tablet for intricate edges, but it does a pretty good job — especially when combined with the other selection tools.

The slider icon along the top toggles the adjustments panel, which houses controls for things like brightness and contrast, noise reduction, curves, and levels. To overcome the lack of automatic adjustment options, Adobe has included over 25 photo effects that can be added with a single touch from the "fx" panel. You can also add text, gradients, and fades, in addition to performing warp transformations.

Individual projects max out at sixteen unique layers and the largest canvas size is 1600 x 1600 pixels, just like in the Android app. We also couldn’t find any way to adjust the resolution of a project, which seems to be stuck at a paltry 72ppi. Still, Adobe has added a nifty navigation method for viewing layers in 3D, which is invoked by double tapping any layer from the layer panel. Your layers become separated in a 3D plane and you can pan using your finger or the iPad’s built-in gyroscope. It feels like more of a gimmick than a useful way to interface with your work, but could be sort of useful as your projects get more complex. 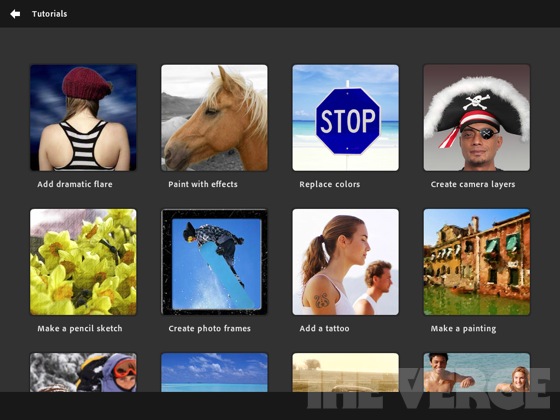 Adobe says that "people will be amazed" by the app's functionality, and while there is certainly an extensive feature-set, this won't replace Photoshop CS5 for most users. Still, there are around fifteen built-in interactive tutorials that showcase the app's strongsuits and help users get acquainted with its functionality. It demonstrates simple color replacement processes and how to apply photo frames, but also details more in-depth tasks like adding people to images and how to blend images. Professional photographers won't start editing large batches of photos on PS Touch, but they might find it useful for collages or more creative applications. 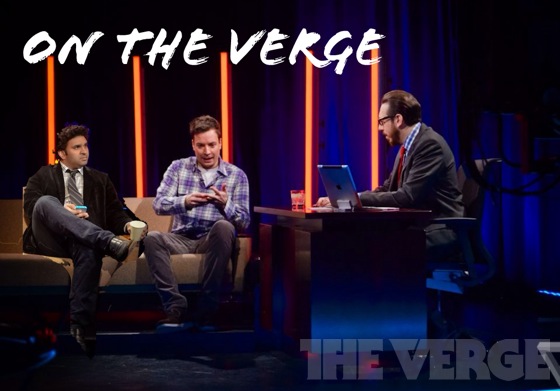 The built-in image browser, for example, lets you quickly add photos not only from the camera or camera roll, but also from Google or Facebook to create quick compositions. I imported a few photos from the most recent episode of On The Verge, and was able to create a photo composition quickly (see above). I added a photo of Nilay Patel sitting on the couch as a new layer in a project that already had Joshua Topolsky and Jimmy Fallon, and used the Scribble Selection to remove the couch background. You can see the results aren’t quite perfect, but I didn’t use any other tools to refine the selection. Once you’re done with a project, you can email the file as a PNG or JPEG, or publish directly to Facebook from the main screen.

Given the iPad's lack of any formal folder structure, PS Touch hooks into Adobe Creative Cloud to offer wireless syncing and storage capabilities. Projects can be uploaded to Creative Cloud with one click from the main screen, and it offers one added feature that you can't accomplish otherwise: layer preservation. This was one of our largest gripes with the Android app at launch, but now you can begin a project on your iPad and finish it on the desktop without losing your layers. You’ll have to download and install a special plugin from Adobe to pick up projects on your PC since files are saved in a new PSDX format rather than PSD. The plugin is only compatible with Photoshop and Illustrator CS5 and 5.1, and can only be used when you upload to Creative Cloud; only flattened JPEG or PNG images can be sent via email. 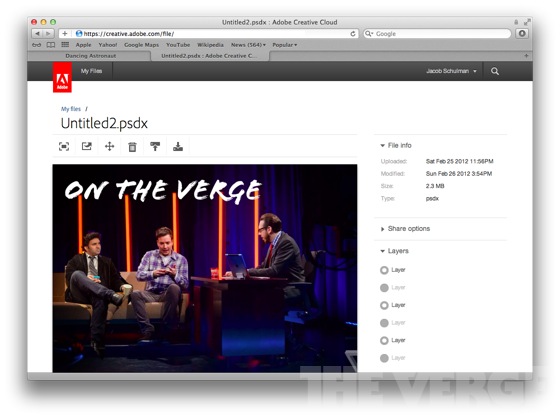 Creative Cloud has a companion web interface for uploading and downloading files. Any project uploaded from Photoshop Touch can be accessed from the web, which also allows for toggling layers and sharing files. Any image or PSD file can be uploaded through the browser, but layers are not preserved when the file is downloaded into Photoshop Touch. It’s odd that you can move files from tablet to desktop without flattening, but that you can’t do the same in the opposite direction. We’ve reached out to Adobe to see if this is a technical limitation or some sort of bug, but for now you can’t simply open a PSD file with Photoshop Touch — at least while preserving layers. Despite the current limitations, it's a pretty sleek implementation that works nicely and doesn’t require much setup. Still, the presence of other sharing services like Dropbox or even FTP would be nice for users that don’t want to take the Creative Cloud route.

Photoshop Touch is a surprisingly functional app that takes the best elements of its desktop counterpart and gives them applications that make sense for a tablet. The primary user for Photoshop Touch will probably spend more time making photo compositions than doing heavy duty retouching, and the app's design reflects that. I was wary of its ability to actually perform tasks, but it's surprisingly functional and even fun to use. The new Scribble Selection tool is a handy solution to a task that would normally require a multitude of clicks, and Adobe has made many design choices to make this app as useful as possible. Adobe has already addressed some of our initial concerns from the Android implementation, but now we'd like to see more robust storage and exporting options in the future. With the added plugins it becomes a solid companion to desktop Photoshop, and here’s hoping there’s even more integration when CS6 arrives sometime later this year. For now, though, it's a pretty solid offering with a whole lot of potential — and it only costs $10.