In addition to renaming their Transformer lineup — it's "Transformer Pad" now, not "eee Pad Transformer" — Asus has announced the new Transformer Pad Infinity 700 series. It's claiming to be the first full HD LTE tablet, and is powered by Qualcomm's Snapdragon S4 SoC, its first ARM Cortex A15 class CPU. The device retains the tablet/keyboard combo of previous generations, but has upped the display to an impressive 1920 x 1200 Super IPS panel. Alongside this, the Infinity 700 series pairs an 8-megapixel rear camera that can shoot at up to f/2.2 with a 2-megapixel webcam on the face of the device, packing all of this hardware into a case just 8.5mm thick.

Additionally, Asus has also announced the Asus Transformer Pad 300 series — the first quad-core LTE device from the company. The 300 series packs an Nvidia Tegra 3 quad-core SoC, with 1280 x 800 IPS display, 1GB RAM and 16GB storage. Despite the choice of Tegra 3 chipset, Asus plans to offer LTE models using a discrete LTE card. The tablet's set to ship with a number of differently-colored plastic bodies, though comes in slightly thicker and heavier than the Infinity 700 at 9.9mm and 635. In terms of imaging, the Transformer Pad 300 has an 8-megapixel camera capable of shooting at f/2.2, along with a 1.2-megapixel webcam. Both tablets are set for release in Q2 this year, though we're still waiting for an official word on price. You can check out how the new Transformers fare against the original and the Prime using our comparison tool. 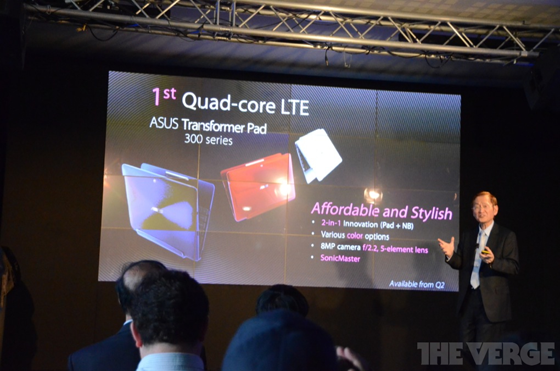