Intel lays out its plan for Android, will cut chip size in half by 2014

Intel has laid out its long-term plans for its mobile processors, aiming to move from the current 32nm architectures of the "Medfield" Atom Z2460 to 22nm next year, and to just 14nm by 2014.

Share All sharing options for: Intel lays out its plan for Android, will cut chip size in half by 2014

As Paul Otellini said at the Intel press event at Mobile World Congress, "it wouldn't be an Intel presentation without a roadmap." The company has laid out the long-term plans for its mobile processors, aiming to move from the current 32nm architecture of the Medfield Atom Z2460 to 22nm next year, and to just 14nm by 2014. The rate that these architectures are shrinking at mean that Intel is aiming to move faster than Moore's Law, which states that the number of transistors you can fit into an integrated circuit doubles roughly every two years. This doubled density leads to equal power in chips half the size, or alternatively double the power from the same sized chips.

A key factor in the rapid acceleration in size reduction is Intel's planned adoption of FinFETs next year, which allow a single transistor to act as a multi-gate device. This means that one transistor can perform far more calculations than in a traditional setup, with far fewer electrodes needed and therefore greater space efficiency. This in turn means that chips can get smaller while still becoming more powerful. 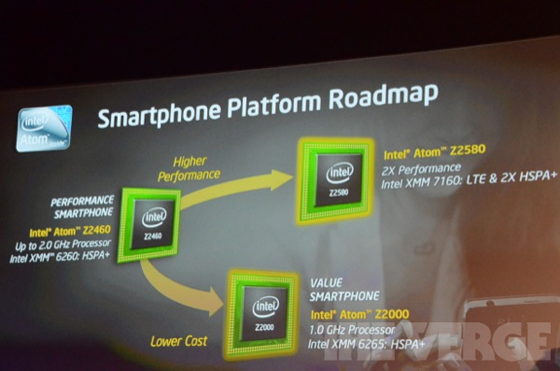 While Intel is normally fairly candid about the technical details behind its processor designs, besides this roadmap it's remained far more tight-lipped. As Otellini said in answer to a question later in the press event, the mobile market is far faster paced than the desktop and his company is only just getting started: 14nm chips will put Intel on the brink the 10nm theoretical limit of silicon, and Otellini revealed that it has developed enough factory capacity for both PC and non-PC devices. And beyond Lava, Orange, ZTE, and Lenovo? Otellini said that he believes the chips Intel is shipping now are "sufficiently good to light a fire under [LG, Samsung, and Apple]. So watch that space."