A roundup of the new products announced on day one of Mobile World Congress.

The dust has settled on day one of Mobile World Congress, and it's been packed full of product announcements. While most of the world was sleeping Nokia announced a number of phones, the pick of the bunch being the 808 PureView, a study in excess with an unprecedented 41-megapixel camera sensor. After the Nokia unveilings, ZTE took center-stage and announced over eleven new products, including a high-end Android device called the ZTE Era and a Windows Phone, the ZTE Orbit. Samsung made its Galaxy Note 10.1 official, bringing the S-Pen stylus and Android 4.0 to its 10.1-inch tablet, and Asus announced a new convertible tablet, the Transformer Pad Infinity (LTE). Asus has dropped the 'Eee' from the Transformer range and its latest US flagship has LTE connectivity, a 1900 x 1200 IPS display and Qualcomm's new Snapdragon S4 dual-core 1.5GHz processor.

You can find all of the products of MWC in our database ready for you to compare and contrast. We've added Asus Transformers from past, present, and future to our comparison tool, why not add your favorite tablet and see how it measures up against Asus's latest offering? 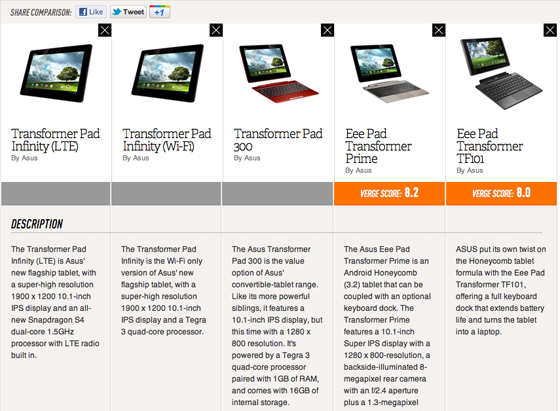