Apple and Google accused of patent infringement with their use of the well-known Street View feature within Google Maps.

PanoMap, a Florida-based company, filed a patent infringement case against Apple and Google late last week. The suit alleges that Apple and Google infringe a single patent with their use of the well-known Street View feature within Google Maps. In addition to Google's web-based services, Apple uses the Street View technology with its iPhone, iPad, and iPod touch devices.

The patent, US No. 6,563,529, was filed back in 1999 and issued in 2003. There are a total of 28 claims in the patent, but the broadest of them essentially cover a mapping system that displays a wide map view in combination with a more detailed view of location specifics. The claims also require synchronization of the two views. For instance, the viewing angle in the detailed image will change in response to a corresponding change in the viewing angle of the main image. Here are a couple of figures from the '529 patent where the wide view is a panoramic of the interior of a home, while the smaller image shows various floor plan details. 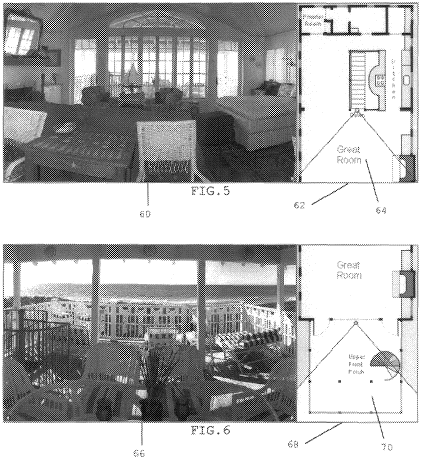 Comparing the potential patent coverage to the sample Street View below, ProMap would likely argue that the panoramic view of Woz Way is the wider general view, a small detailed image of street information is provided in the bottom corner, and orientation movements in one view are reflected in the other. 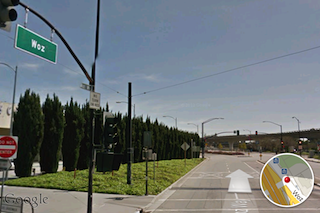 Apple and Google will task their lawyers with dissecting every phrase and word in this patent, so it may be some time before we have a handle on its real scope and value. However, we've got at least one workaround the tech behemoths could implement to skirt this patent right now: eliminate the detailed view at the bottom corner of the Google Maps feature. In fact, it doesn't look like the smaller detailed image even appears by default in Google's web version of the service.

And for those out there hoping these circumstances will bring Google and Apple together against a common foe, don't count on it. It's unlikely PanoMap will present the threat required to create such a coalition. However, we'll leave you with this fun little fact: in describing state of the art panoramic viewing technology back in 1999, the patent uses Apple's QuickTime VR image services as a primary example — unimportant in the grand scheme of things, but mildly amusing. We'll keep you updated as we learn more.