ZTE claims its latest Orbit Windows Phone can support NFC, but Microsoft isn't discussing its own support in the operating system just yet.

Share All sharing options for: ZTE claims its Orbit Windows Phone supports NFC but Microsoft stays mum on its own plans

ZTE unveiled its latest Windows Phone device at Mobile World Congress this week, and the company claims it will include an NFC chip. The ZTE Orbit, designed as a low-end Windows Phone for markets like China, features Microsoft's latest Windows Phone "Tango" update with support for 256MB of RAM, but no direct support for NFC. ZTE lists NFC as a hardware feature of the Orbit at its Mobile World Congress stand, and a company representative confirmed that the device will ship with the support at the request of carriers. 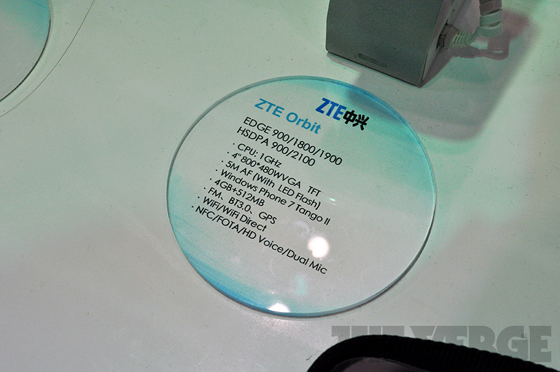 We asked Microsoft's Greg Sullivan about NFC for Windows Phone 7.5 and he confirmed that OEMs can enable the support given the access they have to build native code applications. Microsoft isn't surfacing NFC support directly within Windows Phone just yet, but ZTE could potentially build its own implementation. Whether Chinese operators will request the support remains to be seen, but ZTE's device isn't the first Windows Phone with NFC just yet.

Until Microsoft supports NFC directly within Windows Phone, ordinary application developers will not be able to access the APIs required to make use of such hardware. Microsoft has previously promised that it is working on Windows Phone NFC support, but it's not yet clear whether this will be part of the bigger Windows Phone 8 "Apollo" plans or a separate Windows Phone 7.5 "Mango" update over the coming months. Understandably, Microsoft isn't discussing any of its Apollo plans just yet.