Apple's market cap crosses $500 billion: a look back at Apple's value over the years

Apple's market cap crosses $500 billion: a look back at Apple's value over the years

Apple's overall market cap passed $500 billion this morning (it's currently at $505.1 billion as of this writing) — fairly unprecedented territory. According to The Wall Street Journal, only five other companies have ever had a market cap in excess of $500 billion, and only one of those companies (Exxon) has done it in the last 10 years. Another way of putting Apple's size into perspective is noting that Microsoft, Facebook, and Google combined are only worth $567 billion. It's no secret that Apple's been earning money hand over fist for some time now, but we thought it was worth looking back Apple's value over the years during some key events to see how the company got to where it is now.

One of the most surprising figures comes when looking at Apple's performance since Tim Cook took over as CEO. For years, there were questions as to what exactly would happen with Apple's leadership when Steve Jobs eventually stepped down, but Cook and Apple navigated that transition with nary a hiccup. Apple's market cap was $348.8 billion when Cook took over on August 24th of last year — that increased to $392.2 billion by the iPhone 4S launch on October 14th. Perhaps even more surprising is that Apple's market cap has continued to grow significantly since then — it has grown 27 percent since the iPhone 4S launch, without any major new product launches to speak of. Of course, the new iPad that's just around the corner certainly isn't hurting matters.

Here's a look at Apple's market cap over the years on some key dates in the company's history. (All numbers are in billions.) 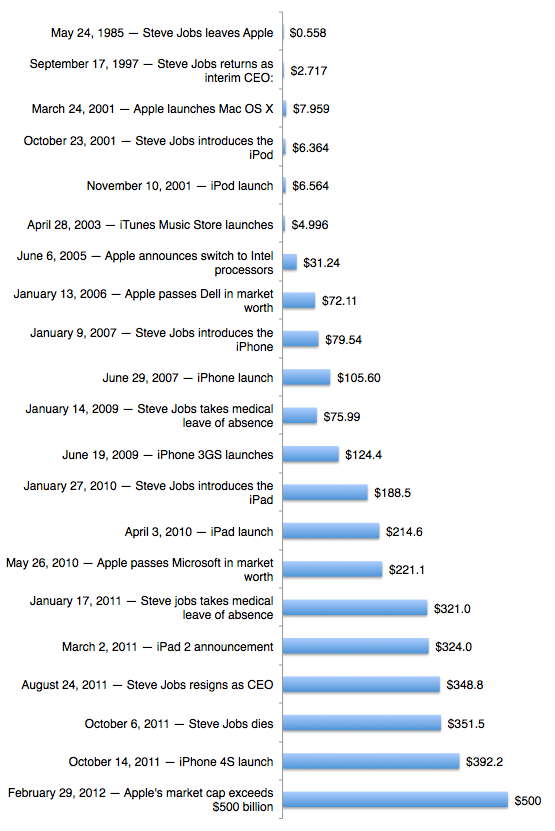