Motorola gets patent ruling against Apple's email services in Germany

Share All sharing options for: Motorola gets patent ruling against Apple's email services in Germany

The Mannheim Regional Court in Germany issued an injunction this morning against Apple, ruling that certain Apple email services infringed Motorola patent no. EP0847654. The ban is apparently focused on push email features available through Apple's iCloud and MobileMe services. However, unlike a separate ban Apple faced this morning relating to certain Apple 3G devices in Germany (which has now been temporarily suspended), the effect of this ruling will not be felt immediately. Namely, Motorola will have to expressly seek enforcement of the injunction, after posting a bond of 100 million euros. It's also very likely Apple will appeal this decision, which could further delay the administration of an injunction.

The Motorola patent at issue in this case is an interesting one. The patent is titled "Multiple Pager Status Synchronization System and Method" and claims priority back to 1995. To the extent it broadly covers push email services (which isn't absolutely clear to us right now), that 1995 date may suggest Motorola was working on push technology for pagers around the same time as RIM. You'll probably remember that Motorola and RIM were engaged in a heated patent war of their own a few years back that eventually settled with a cross-license agreement in 2010.

While the true scope and value of this patent can only come from an interpretation of the patent claims, the figures do provide some useful visual depictions of the purported invention here. In particular, the transmittal of the "status change of message 1" to pager "N+1" in the patent figure below could arguably provide some disclosure for push messaging. 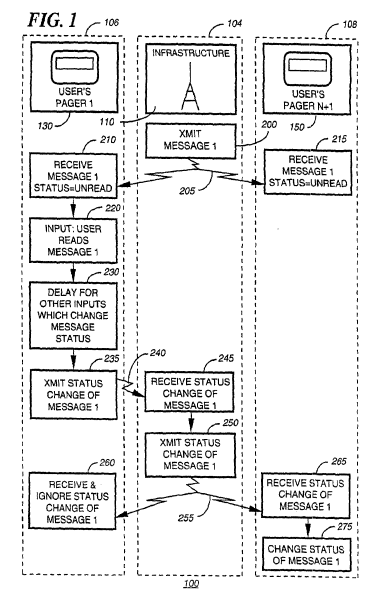 Given what we've seen in the past with these types of injunctions in Germany, iCloud customers shouldn't expect a disruption in their email services anytime soon. There's still a lot that can change based on future litigation moves from both Apple and Motorola. We'll keep an eye on it.