On Wednesday, February 8th, Wolfram Alpha will be adding a new, "Pro" option to its already existing services. Priced at a very reasonable $4.99 a month ($2.99 for students), the new services includes the ability to use images, files, and even your own data as inputs instead of simple text entry

Share All sharing options for: Wolfram Alpha Pro democratizes data analysis: an in-depth look at the $4.99 a month service

On Wednesday, February 8th, Wolfram Alpha will be adding a new, "Pro" option to its already existing services. Priced at a very reasonable $4.99 a month ($2.99 for students), the new services includes the ability to use images, files, and even your own data as inputs instead of simple text entry. The "reports" that Wolfram Alpha kicks out as a result of these (or any) query are also beefed up for Pro users, some will actually become interactive charts and all of them can be more easily exported in a variety of formats. We sat down with Stephen Wolfram himself to get a tour of the new features and to discuss what they mean for his goal of "making the world's knowledge computable."

A (re) introduction to Wolfram Alpha

First released in 2009, Wolfram Alpha presents a different way of interacting with knowledge and data than anything else out there on the web. Built on the foundation of Wolfram's Mathematica product, Wolfram Alpha is a "knowledge engine" instead of the "search engine" that we've all become familiar with. What that means is that Wolfram Alpha is more structured in the query field you use to access it, the data it uses as a source, and the results that it gives you.

Wolfram Alpha is excellent at returning answers to mathematical queries and scientific queries, but it also can provide results based on its structured data. Most people know it now as one of the sources for Apple's Siri feature on the iPhone 4S. Wolfram Alpha does analysis on every query to parse equations and even parse natural language questions to better understand what the user is asking. In fact, Wolfram tells us that in many cases the service can provide better results from Siri than from text queries because there is "more structure to what they're saying" than what most people have trained themselves to type into search fields.

"People don't want answers, they want reports."On the data front, Wolfram Alpha uses a very large set of data sources which are verified, tested, and highly structured. The company takes all that data and ensures that it's structured again in such a way that it can be "computable," which leads to the real power of Wolfram Alpha and explains why it's not simply a search engine or a more reliable version of Wikipedia. Wolfram Alpha doesn't just return information, it analyzes and does computation on your inputs and on its own data to provide "reports" instead of just "answers."

Take the query "Pacific Ocean." Where Google provides a list of relevant web pages and Wikipedia provides an article that gives a narrative overview of crowdsourced information, Wolfram Alpha pulls in information from multiple data sets, performs actual computations on those data, and then presents a "report" comprised of different sections of information that its engine believes might be interesting or relevant.

The other thing we've discovered is that people don't want answers, they want reports. In other words, they don't want to know that the answer to the problem is "42." They want this report that tells them "how does 42 fit into everything else." We had the idea we could generate these reports from the beginning, but I hadn't realized that even if you don't do that, even if it's a slam dunk "here's the answer," people don't really like that. [...] They need it contextualized.

Wolfram Alpha Pro is a new set of features that essentially supercharges the service and should make it much more compelling to a wider swath of users. On all three fronts that we've discussed: the results, the query field, and the available data sources, the Pro version brings new functionality.

The first and most obvious feature is that users will get an account at Wolfram Alpha with a complete history of their queries, uploads, and downloads. Users will also be able to mark any of the above as "favorites" to find them later.

Pro users will now have three new options in the reports that Wolfram Alpha provides. The first is that any chart created within a report will be exportable — users can customize any chart or graph and download an image or even vector file of it. 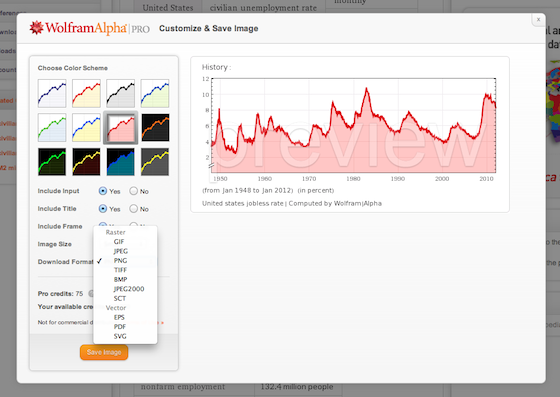 The export feature isn't limited to static images, however. If Wolfram Alpha's analysis of any query isn't exactly what you're looking for, you can download the actual data sets used to create the report. This means that you'll have access to the very same data Wolfram Alpha uses to further your own research. Unfortunately, there will be some data sets that aren't exportable because of the various licenses the company has with its providers.

Still, it's a powerful feature made more powerful in that you can choose any number of export options — including a basic Excel spreadsheet, vector graphics, and JSON data if you'd like to integrate the data into your own web app. 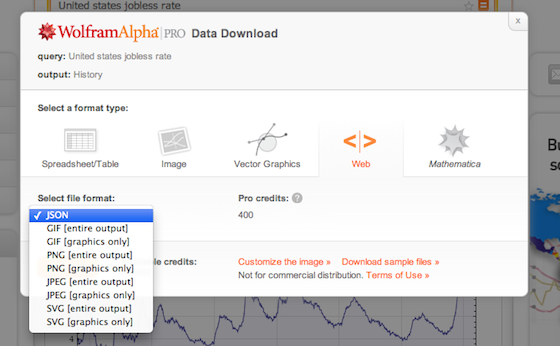 Both image and data exports will work in addition to the standard subscription rate — users will get an allotment of monthly points that will count against exports but can be re-upped as needed.

Wolfram Alpha Pro is also expanding on a feature it introduced a few months ago, the Computable Document Format (CDF). CDF is a browser plug-in that enables interactivity with charts, graphs, and other data.

It's based on a technology standard that comes from Mathematica. The main uses of CDF to-date have been textbook people and reports, interactive reports and interactive diagrams in textbooks. But what we're doing here is generating CDFs on the fly and we're able to then just do computations [locally] using CDF.

CDFs offer different options for different reports, but the gist is that if there are any variables to be manipulated, you can adjust them with CDF and see the results instantly. 3D molecules can be rotated, mathematical formulas can be tweaked, and image effects can be manipulated. 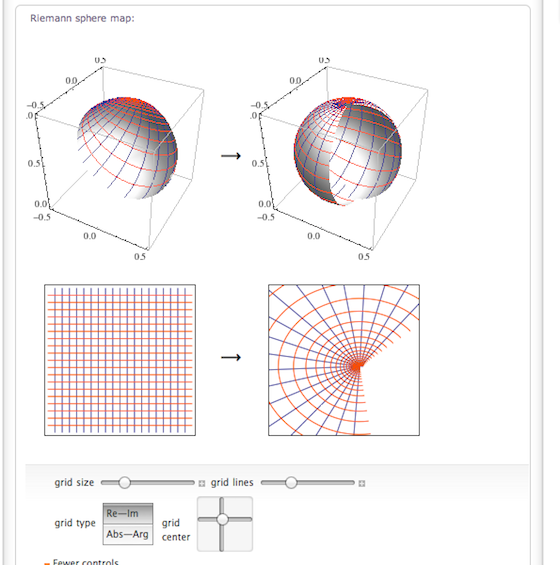 Queries "beyond the text field"

Wolfram Alpha Pro will allow users to input more than just simple text as queries. The first and most obvious addition is an "extended keyboard" which is similar to the larger keyboard available on its mobile apps. This makes it easier to enter mathematical symbols without having to remember obscure keyboard combinations

Users will also be able to use images as inputs. Wolfram Alpha Pro will build reports based on the image with some basic analysis and a few options to alter the image. Once an image is uploaded, the engine will provide interactive reports with histograms, EXIF data, lists of colors with the HTML identifiers, edge detection, optical character recognition for text, a few image filters and effects, and a bit more. These options are nothing new or especially significant to anybody with a passing familiarity with Photoshop or other desktop image editing apps, but could they be helpful if you're looking for a quick analysis of an image. 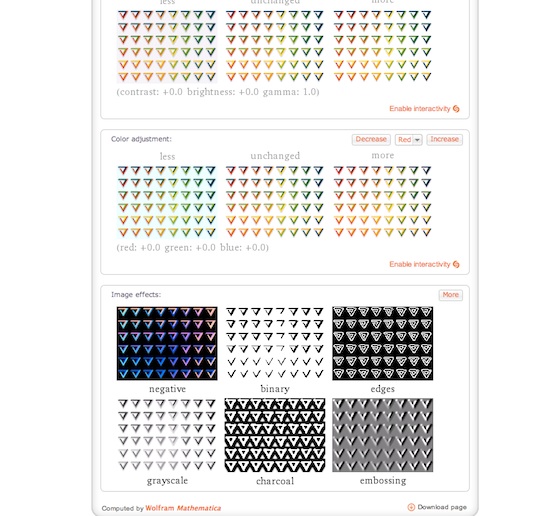 Wolfram Alpha Pro will actually accept up to sixty different file types and attempt to do an analysis on them. Beyond image formats, you can also upload vector graphics, 3D geometry files like pLY and STL, audio files from AIFF to FLAC, XML, spreadsheets, and plenty of custom formats from the fields of medicine like HDF and FITS, science, chemistry, and mathematics. In each case, the "knowledge engine" will look at the file and present its best attempt at "interesting" reports and analysis.

You're forgiven if your eyes glazed over a bit while reading about the arbitrary file formats that Wolfram Alpha Pro can analyze, but hidden in that list is something a little bit revolutionary.

BYOD: Bring your own Data

"In general the objective is to be able to tell an interesting story based on the data."Wolfram Alpha built its reputation on being able to sift through massive amounts of seemingly arbitrary data and present interesting analysis based on it. With the new Pro offering, Wolfram Alpha will turn that powerful analytical engine to your data. You can upload any of the above file formats and the knowledge engine will create an automatic report based on its best guess as to what it actually is.

While on the surface it might seem like this is little more than automated charts and graphs, what Wolfram Alpha is actually doing is performing a complex set of analyses on the data itself to guess exactly what it is. For example, if you uploaded a set of dates and prices, Wolfram Alpha will actually try to determine exactly what those prices represent. Stephen Wolfram gives an example:

It can figure out: is that sequence of dates and dollar figures likely to be an asset price? Or is it the amount of lemonade that people bought? It uses some heuristics based on seeing to what extent this looks like [random data] and to what extent it looks like independent samples to guess whether it's actually an asset price — and given that it thinks it's an asset price, it will go ahead and figure out a growth rate summary.

In other words, the engine actually customizes its report based on what specific data it believes it's seeing. On top of that, it will also only present reports that are "interesting" in some way. Wolfram Alpha will compute the reports it can create off of any data and only bother to return charts, graphs, and analyses that might actually be useful.

We're generating many more analyses than we actually expect to show to the user. What's happening is we're generating it and it turns out and we look at it automatically and we say this one isn't terribly interesting, let's not show that to the user, let's only show them the interesting ones. In general the objective is to be able to tell an interesting story based on the data.

Essentially, you can apply the "knowledge engine" that Wolfram Alpha has been building and applying to huge and various data sets for the past two years to your own data. Having done that, the other features mentioned above still come into play — exportable graphs, saved queries, and interactive CDF charts can all be kicked out in each report. As with the data and chart export, data imports will be taken out of your points.

To see why this might be revolutionary, put yourself in the mindset of a small business owner. Instead of trying to hassle with interpreting a spreadsheet of website traffic and sales data, he or she could upload it to Wolfram Alpha Pro and have some level of confidence that a) it will understand exactly what the data is and b) it will present him or her with an analysis that's actionable.

"The trick is to be able to figure out automatically what kind of analysis is worth trying to do."We're excited by the possibilities of Wolfram Alpha Pro, and not just for the realm of academics and research. Regular users may not have had much reason to dig into the service before now, but the ability to bring the entire brunt of Wolfram Alpha's computational engine on any arbitrary piece of data democratizes the idea of statistical analysis.

The service goes live on Wednesday the 8th, and there will be a trial period if you'd like to give it a shot yourself.