Google has announce the availability of Chrome for Android Beta, which is based on the same code used in the desktop versions of the browser. We've had a chance to take it for a test drive.

Chrome for Android — the long-rumored, oft-requested grand unification of Google's mobile and desktop browsing technologies — has just been announced today, and it's being made available immediately as a beta release for phones and tablets running Ice Cream Sandwich. Though Android's existing browser has long shared bits and pieces with desktop Chrome (notably WebKit rendering and Google's V8 JavaScript engine), the release of Chrome for Android represents a more thorough synergy: they're both now based on the open-source Chromium Project, which means it'll be easier for Google to advance the products in better lockstep with one another — features, capabilities, fixes, and so on.

The product represents as much a technical milestone as anything else, but that doesn't mean Chrome for Android doesn't have new user-facing features, too: besides a fresh UI, Google is touting a new, more natural tab management interface, bookmark and tab synchronization with the desktop, support for incognito windows (this is Chrome, after all), and something called Link Preview that makes it easier to select the right link in a densely-populated area of a page. More on that in a bit.

We've been playing with the beta recently on the Galaxy Nexus, and we can say unequivocally that this is a nice upgrade from the Android browser that you've grown used to. It's not going to revolutionize the way you browse on your phone or tablet, but it's generally a smoother experience across the board. Google's focusing more on the user's experience and their perception of speed — things like UI improvements, better pre-fetching, and smoother scrolling — than on actual raw benchmarks, but Chrome delivers in that department anyway: we clocked a Sunspider 0.91 score of 1923.5ms with one tab open, 13 percent better than the 2175.1ms we saw in the old browser. (Both scores were clocked in rapid succession on the same Galaxy Nexus.) And as for that smoother scrolling we mentioned, Android 4.0's stock browser performs competently on rich pages like The Verge, but Chrome really takes it the last mile. We saw the occasional hiccup and freeze, but in general, there's far less stutter in zoom and fast scroll operations. Even more than the new functionality and interface tweaks, that slight bump in performance might be our favorite "feature" here. 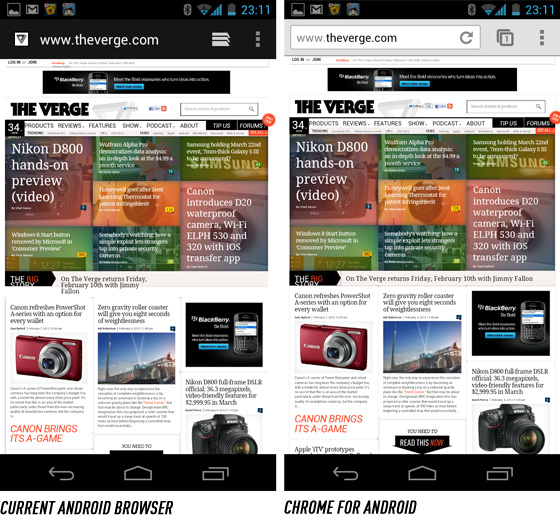 Chrome for Android introduces the notion of "place shifting" your browsing session: it keeps track of every Chrome tab that's open on all of your computers at all times, which makes it easier than ever to get up from your desk, pull out your phone, and pick up where you left off. How does it do that? Google's serious about getting Chrome users to sign in — you may recall that sign-in and sync were tweaked in Chrome 16. And in fact, the very first thing you're asked to do when you install Chrome for Android is link to your Google account, which sets you up to use tab and bookmark sync with Chrome on all of your other machines. It works almost instantaneously; every time we changed a bookmark or opened a new tab on the PC, it'd be reflected on the phone in a matter of moments. Chrome for Android doesn't automatically open a tab every time you open one on the desktop — rather, you can pop open a list of opened tabs grouped by each machine you've got synchronized to your account.

That slight bump in performance might be our favorite "feature" here

Beyond speed and sync, tab management is a focal point in Chrome, which adapts an almost webOS-like interface (in fact, the app's official announcement post describes managing tabs "as if you're holding a deck of cards in the palm of your hands"). The Open Tabs button in Chrome's action bar now permanently indicates the number of tabs you actually have open, fixing a pain point with the old browser. Tapping it takes you into this card interface — one card per tab — where you can see thumbnail previews of each page in the state it was in the last time you viewed it. This is where it gets interesting: you can tap the "X" on each card to close it, but you can also swipe it off the screen with a flick of the finger. If you've got multiple tabs, they stack on top of one another; swiping your finger up and down along the "deck" collapses and expands it. You can even use two fingers to "spread" cards apart and get a better view of the cards in between. It might all seem like overkill, but we're living in an age where phones have 1GB (or more) of RAM and multi-core processors, so being able to effectively harness a host of tabs at once becomes a plausible concern.

Of course, Google's clear that this is a beta product right now, and it's not without its flaws. As we mentioned earlier, we saw the occasional "hiccup" while zooming and scrolling pages — not normal stutter, just a seemingly random pause here and there. Also, Link Preview needs some ironing out. In theory, the feature is supposed to automatically pop up a zoomed-in bubble to help you choose the right link when you're tapping in a crowded area of the page, but we found it to be inconsistent — it'd frequently fail to show in places where it would have helped, and instead we'd end up tapping the wrong link. Hopefully, it'll be cleared up by the time the beta label comes off. Also bear in mind that Adobe's Flash Player for Android doesn't work, though that's becoming less of an issue by the day.

Google says that the long-term plan is to make Chrome Android's default browser, and everything we've seen here suggests that's the right move. In the meantime, it'll be a free Android Market download, where it'll install side by side with your existing browser. We'd go so far to say that it's good enough in its present beta form to be used as your only mobile browser, though — it's solid, fast, and already head and shoulders above the aging app it replaces.

Joshua Topolsky contributed to this report.