Crowd-sourced Q&A service ChaCha is found to use questionable methods of vetting, asking and answering questions, in ways that return some offensive and incorrect answers

This morning Gizmodo published an article which uncovered the weird and shocking answers returned by ChaCha, a "human-powered" question and answer service which functions — partially — like a search engine, but also a lot like Yahoo Answers. Importantly, ChaCha is now being used in an Android application which is a Siri-esque competitor, Iris, and the company (ChaCha) is partially funded by Bezos Expeditions, the personal investing fund of Amazon CEO Jeff Bezos.

ChaCha, unlike Yahoo Answers or Quora (both of which offer similar features), "pays" its contributors at a rate of around $0.01 to $0.20 per answer, depending on the scenario. Contributors can answer questions, as well as arbitrate and check answers. It is unclear if the questions themselves are vetted as even the suggested search terms ChaCha returns as you type are fairly eyebrow-raising. In his report, Gizmodo's Jesus Diaz posed several questions which illustrate the issue, but one stands out. When ChaCha was asked, "are whites superior to blacks?" the answer it returned was, "Whites are NOT superior to blacks. Like Dr Verwoerd and the original, genuine policy of apartheid always said." The answer is not only offensive, it also doesn't make any sense. There are countless examples of ChaCha returning similarly ridiculous, sad, and offensive results.

More importantly, the existence of such a terribly flawed service raises a lot of questions. For instance, ChaCha is very obviously not a search engine in the sense that Google or Bing is, but it sort of looks like one, so is it reasonable for people to expect unbiased answers to their questions? And while Siri has some interesting and clever answers to specific questions, Apple's product is powered by WolframAlpha, Google, and personal data stored on your handset; with each of those sources, the results returned are empirical or algorithmic, not human. What is a search engine's responsibility to its users, and who is responsible if the answers are completely reprehensible?

One thing is very clear: ChaCha is in dire need of an improved vetting process for both its questions and answers. Since publication of the report, ChaCha has already begun changing some of the more offensive answers to the questions, though they have not officially responded to Gizmodo's piece. What is not clear, however, is what the company — which has legitimate backers — actually aims to be. If its current functioning is any indication, all signs point to a standard SEO gaming engine, and if that's the case then it is seemingly doing just fine. But, if it actually wants to compete with real services, it is going to need to take a hard look at its processes and its algorithm. 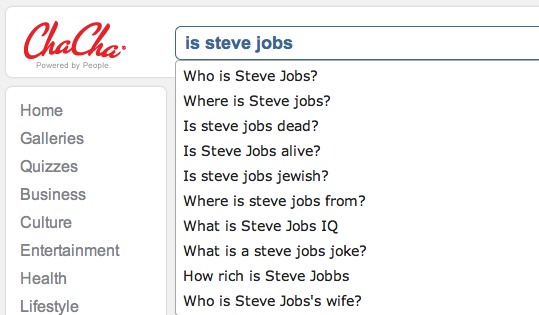