Is the iPad 3 just around the corner?

Today the Apple rumor mill is fixated on a photo doing the rounds which allegedly shows the back housing of the next iPad (the iPad 3, or iPad HD, depending on who you talk to). The image, which surfaced on the Repair Labs Blog, is said to be similar to the previous model's back (that's the iPad 2 on the left, iPad 3 on the right), save for changes which will allow for a larger battery, slightly reconfigured logic board, new cameras, and a different screen. Normally it's hard to tell whether or not these kinds of leaks have any basis in reality, but most of what the image shows lines up with news we've been hearing from our sources.

According to people familiar with the product, though the new iPad will be touting that double resolution display — a true iPad Retina Display, clocking in at 2048 x 1536 — the device will be nearly physically identical to its predecessor, but the slate will be about one millimeter thicker overall. We're also told that the A6 CPU the iPad 3 is likely to sport will include a significantly more powerful GPU — no big surprise there. What is surprising, however, is that our sources say that the A6 will not be a quad-core chip, but will remain dual-core. We've previously heard that the device would have a quad-core CPU as well as an LTE cell radio on-board, but at least part of that story wasn't accurate.

As far as timing goes, everything we've heard thus far suggests that a February announcement is not happening. Last year, Apple released its iPad 2 in early March — just in time to sell loads of the device to highly-talkative South By Southwest Interactive revelers via a pop-up shop... and we wouldn't be surprised to see a repeat performance in 2012. Luckily, that 12 month mark is just around the corner, and Apple is known to be fairly punctual.

Update: Interesting point to note. There are 29 days in February this year (it's a leap year), and the 29th falls on a Wednesday (the day on which Apple has announced every other iPad). The iPad 2 was announced on March 2nd, 2011, and made available the following Friday (March 11th). If Apple were planning on having these ready for the weekend of March 9th, it seems relatively possible that they could choose that date... perhaps with a catchy theme like "It's time to leap ahead."

Update 2: 9to5Mac has uncovered a higher-resolution image of the purported casing. We've updated the image above. Meanwhile, Apple.pro (via MacRumors) claims to have an image of the back of the iPad 3 casing along with the magnets used to attach the Smart Cover, as you can see below. 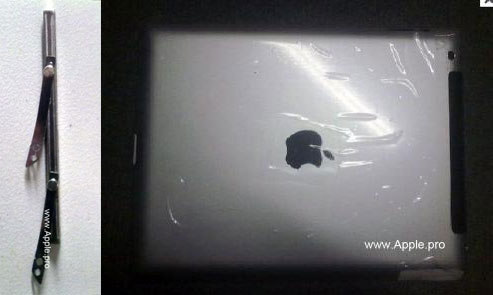