Google is starting up it's own opt-in web monitoring service to help it get even more detailed information on its users and how they spend their time on the internet. There are two services: the first, called Screenwise, requires users who sign up to install a Chrome extension that'll track your usage, and the second will pay users a bit more to install a special tracking router in their home.

Google is starting up two new opt-in web monitoring services to help it get even more detailed information on its users and how they spend their time on the internet. The first, called Screenwise, requires users who sign up to install a Chrome extension that'll track your usage. In exchange for giving Google the right to gather expanded tracking information, the company will give you a $5 Amazon gift card and another $5 card every three months until you've been with the program for a year. Google's signup page for the new service is live, but you can't sign up at the moment due to the number of requests the company has received.

Ars Technica reports that the second service is a bit more secretive. According to screenshots sent by an anonymous tipster to the site, the so-called Screenwise Panel will consist of 2,500 paritcipants who'll consent to use a Google-provided router (it looks like Cisco's E4200) that will record a "household's web access," though it sounds like it won't capture info from devices other than computers. Specifically, Google says that it will share "browsing time, duration, and mode" with Knowledge Networks, which will be running the studies, and "aggregated Panel Data" will be given to "academic institutions, advertisers, publishers, and programming networks." According to the leaked screenshots, those who are invited will receive $100, and $20 per month thereafter for a year.

Google confirmed in a statement that the web panel does exist, and stressed that it was a completely optional, opt-in program: "People can stay on the panel as long as they'd like, or leave at any time," and in the program's FAQ it says that "personally identifiable information will never be used... to advertise or market products or services to you." In both programs, the leaked screenshots of the signup process show that browsing performed in an incognito window will not be personally identifiable. 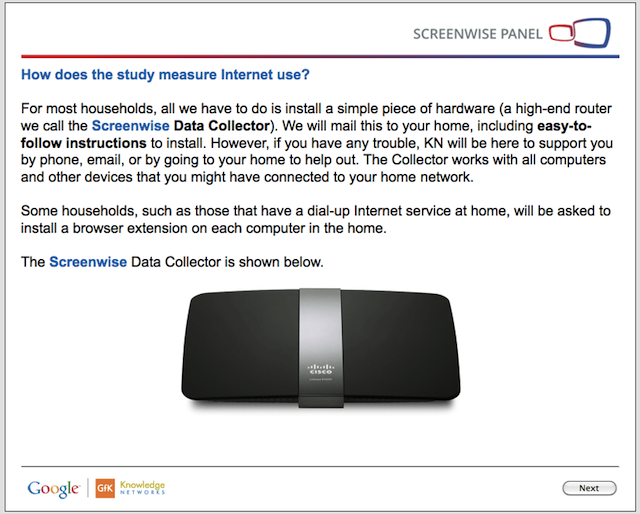