Ricoh is showing off its first zoom module for its GXR platform with an APS-C-sized sensor. The A16 shoots 16-megapixel RAW images, and takes 720P video.

Back in 2009, Ricoh had the bright idea to release a body with not only interchangeable lenses, but entire interchangeable camera modules — sensor, electronics, and all (as seen below with the A12 50mm F2.5 macro module). While the company's already released some modules with APS-C-sized sensors and fixed focal lengths, as well as zoom modules with smaller sensors, today we got a first look at its new A16 24-85-millimeter APS-C zoom module. 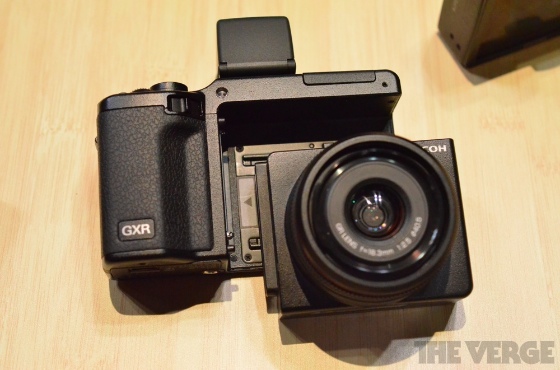 The lens features 11 elements in 9 groups, with a variable aperture of F3.5-5.5, and takes 16-megapixel images. The long, 114-millimeter barrel looks and feels a little odd without a manual zoom ring, but otherwise the unit is reassuringly weighty and solid. While the 25cm minimum focusing distance, poor 3fps continuous shooting speed, and substandard 720p video mode are unlikely to convert new users to Ricoh's platform, longtime GXR users might want to take a look when the A16 launches in March.

The cameras, lenses, and tech of CP+ photo and imaging 2012