Onkyo has launched the GX-W100HV, a pair of bookshelf speakers with baked-in DLNA support.

Onkyo has announced the GX-W100HV, a pair of traditional bookshelf speakers with a twist: DLNA support baked into the cabinets. The master speaker incorporates 802.11 b/g/n Wi-Fi, and relies upon Wi-Fi Protected Setup (WPS) to connect to your router — there's no way to input an SSID and password here. Once they're connected, the speakers broadcast their availability around your network as a receiver for any DLNA-capable app on your PC, phone, or tablet, and are able to render DRM-free MP3, AAC, or WAV files. If you want to incorporate them into your existing sound setup, the speakers also include optical and analog inputs. These aren't the first DLNA-capable speakers we've seen, but the growth in products like this allow the industry standard DLNA to act as a true rival to Apple's AirPlay which currently dominates the discussion surrounding ad-hoc wireless speakers.

In terms of audio, the speakers are capable of outputting 15 watts per channel, with each cabinet carrying a 12cm A-OMF woofer and 3cm tweeter that Onkyo claims has been specially tuned for voice. The front panel of the master speaker carries an input selector, two-band EQ, and a headphone socket. Although Onkyo quotes a flat frequency response up to a high range, its low-end seems to be a little lacking — the frequency response bottoms out at around 50Hz, though the ported design ought to keep it flat to that point. The GX-W100HV is set for release in Japan on the 18th of February for a pricey ¥40,000 (about $520). 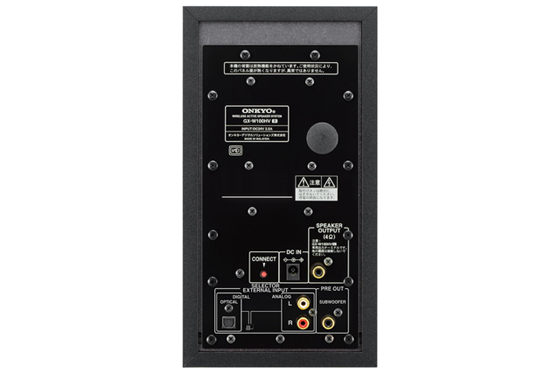