Over 90 percent of Americans still pay for TV, and people overwhelmingly opt for traditional television over streaming video. A small but growing minority, however, is watching more streaming video and using only free broadcast TV.

Share All sharing options for: Nielsen: most Americans still pay for traditional TV, but a growing minority go broadband-only

Broadband internet adoption is growing in America, but so far the ability to stream video hasn't led to a mass exodus from traditional television. According to the latest Nielsen report on media consumption, more Americans still have cable, satellite, or telephone company-provided television than have broadband internet, with 90.4 percent of households paying for television and 75.3 percent — about 5 percent more than last year — paying for broadband.

A small but growing percentage of households, however, are opting to ignore cable or satellite, using broadband internet along with free broadcast TV. While only 5 percent of consumers, their numbers are up over 20 percent from last year, and they watched about half as much TV and twice as much streaming video as the average viewer. Of course, that's still a heavily skewed number: 122.6 daily minutes of TV and 11.2 minutes of streaming for this small group versus over four and a half hours of TV and a mere five minutes of streaming in general.

While this report tells us something about the growing trend of streaming and a minor shift away from paid television, we'd be curious to see how these numbers vary based on age or location. It's also important to note that some areas, especially rural ones, may have access to cable or satellite TV but only slower dial-up internet, so some of these numbers aren't purely a matter of consumer choice. TV is still king, but internet viewing may be chipping away at its user base in the next few years. 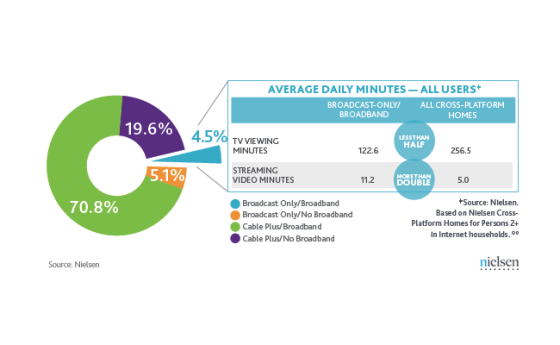