Share All sharing options for: Facebook's next trick: winning over Madison Avenue

At Facebook's first annual marketing conference in New York yesterday, the world's largest social network attempted to convince advertisers and marketers to spend money on "Premium On Facebook," a new kind of paid advertising campaign that aims to boost engagement with users.

Premium On Facebook will allow advertisers to place "stories" — ads which look and act like regular content — directly into a user's News Feed, into the company's mobile apps, and even on the site's log out screen. 85 percent of Facebook's revenue comes from advertising, which accounted for $3.2 billion of its overall revenue last year.

Facebook's COO Sheryl Sandberg seemed to have an idea of who she was talking to when she took the stage.

Sandberg recalled: "Mark Zuckerberg once came up to me and asked 'when does a mid-life crisis happen?'" Her joke was an obvious effort to connect with a middle-aged audience still shocked by how a "dating site" (a description co-founder Dustin Moskovitz jokingly used almost a decade ago) turned into a relevant advertising platform.

The crowd's eyes collectively glazed over as Facebook went on about the difference between "Ads" and "Stories." Don't serve "Ads," Facebook said. Serve "Stories."

But then they heard the data. Every day, Facebook enables over 150 million interactions between businesses and users. The News Feed is responsible for over one billion impressions per day. And according to the company, in the new Premium model, when an ad shows up in a user's News Feed (similar to the latest ad initiative from Twitter), that user is five to ten times more likely to click it.

In a room crowded with number crunchers, that's all that matters.

It all sounded enticing, but it also seemed clear that this audience didn't know the difference between the News Ticker, News Feed, log-out placement, and mobile ad units Facebook was talking about, let alone how and when to utilize them.

That doesn't ultimately matter, however. Facebook signs businesses up for all of those services right off the bat. There was almost a collective sigh of relief when the crowd discovered they wouldn't be ordering off of a foreign menu. 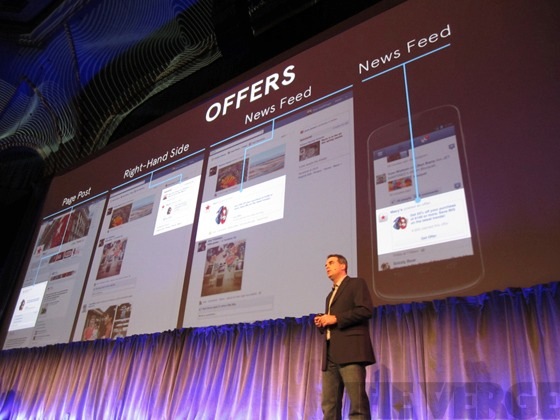 To cap off the first keynote of the day at the Facebook Marketing Conference, the company hosted a panel composed of some executives from Walmart, Aegis North America, and 1-800-Flowers. Stephen Quinn, the EVP and CMO at Walmart, said "One time I said that I'm going to make it to retirement without understanding any of this stuff."

It wasn't clear that Quinn truly does now "understand this stuff," but it's obvious he's making the effort. "Being dumb about what's happening is no longer acceptable," he said with a smile.

Despite Sandberg's opening joke to break the ice with the crowd, Facebook isn't having a mid-life crisis. But one thing is clear: on the eve of its IPO, the company is in a place where it has to grow up, do business with adults, and come up with real ways to keep growing its revenue.

Madison Avenue doesn't need to understand what the Premium On Facebook paid advertising product even means. They just need to be convinced to throw money at it.

Mike Hoefflinger — Facebook's director of global business marketing — told the crowd that currently when a user or advertiser posts something to Facebook, only 16 percent of their followers will see that content. Using Premium On Facebook, that number jumps to something closer to 50 percent.

The audience salivated. People shifted in their seats.

As the keynote concluded, an image of Mark Zuckerberg's face illuminated the giant presentation screen. He started talking and everyone was transfixed, waiting to be told what to do next.