Pew: more Americans report having smartphones than feature phones, 8 percent 'not sure'

Pew: more Americans report having smartphones than feature phones, 8 percent 'not sure'

According to a Pew survey, over half of US cellphone users report having a smartphone, although a diminishing number are still not sure what the term means.

We've seen several signs that smartphones are overtaking feature phones, but now a Pew survey says that not only are smartphone users a majority among 18- to 44-year-olds and recent buyers, more than half of all American cellphone users may have one. In a survey of over 2,000 people, the Pew Internet and American Life project found that 45 percent of cell users said that their phone was a smartphone and 49 percent identified their phone as one of the major US smartphone platforms like iOS, Android, or BlackBerry.

What's perhaps more interesting in this self-reported survey is the decreasing (but still extant) confusion over what constitutes a smartphone. In the survey, 8 percent of users replied that they were 'not sure' when asked if their phone was a smartphone and told that "some cellphones are called 'smartphones' because of certain features they have." That's a fair number of respondents, but it's actually far less than May of 2011, when the number was 14 percent. If people are correctly identifying their phones, that means that even those who don't own a smartphone are becoming more aware of what they are. For a further breakdown on what demographics favor smartphones, you can check this chart or the source link below. 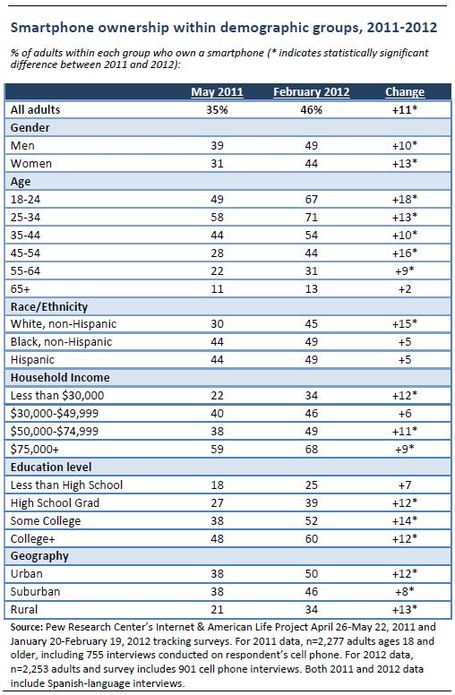