Stephen Wolfram, creator of Wolfram Alpha and Mathematica, has released his analysis of data around his personal life collected over the past 20 years.

Stephen Wolfram loves data. The creator of Wolfram Alpha and Mathematica has spent the last 20 years of his life collecting facts and figures on his everyday movements, from emails, to phone calls, to the number of steps he takes each day. In a blog post, he has analysed this accumulated wealth of data and cross-referenced it with the events in his life. From this analysis he's able to see exactly when he developed new ideas, how writing his book A New Kind of Science affected his other activities, and the build in activity prior to Wolfram Alpha's launch in 2009. 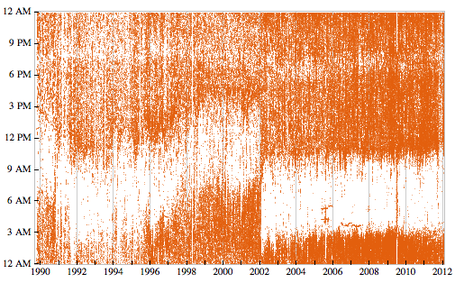 To some, this might be seen as almost obsessive — a hoarder's mentality over every aspect of your daily life — but to Stephen Wolfram it's natural, and as he says, he "actually assumed lots of other people were doing it too, but apparently they were not." Ultimately, he hopes to be able to ask Wolfram Alpha questions about himself and allow the analytical engine to mine the information he's collected to provide answers. We're just waiting for him to produce some Nicholas Felton-like infographics to pull all these numbers together.